Dinamo Minsk will face Hapoel Beer Sheva in the second fixture of their Europa Conference League qualification on Thursday.

Hapoel Beer Sheva won the opening match which was no surprise but they were not convincing enough and have more work to do on Thursday. Here are our predictions.

There is a good chance that there will be few goals in this match although we do not expect to see it from these two particular teams. The first match ended in a 2:1 win for Hapoel Beer Sheva and we have expectations for a similar result for either side here. Both teams can score goals and have been having mostly goal-packed matches lately, so we think that there will be successful shots from both sides.

We had both teams scoring goals in the opening match and we have no doubts that we will see it again in the second match. A one goal difference is nothing and we think that Dinamo will do their best to destroy that deficit as soon as possible. On the other end, Hapoel Beer Sheva have a very strong attack and they perform well both home and away. To add up, Dinamo Minsk had both teams scoring in 9 out of their last 10 games in all tournaments.

The first match had 10 corners at full time and nine of them came from Hapoel's side. The team absolutely dominated throughout the entire game although the two goals do not suggest it. We expect to see more in this match and definitely more action from Dinamo Minsk. They should be able to get a lot more corners than the one they had in the first game.

Dinamo Minsk have always been one of the top teams in Belarus although they have been levels below BATE and Shakhter. The team still is one of the best in the league and has some spectacular stats from the previous season – 55:20 after 30 games. The new season has been much more difficult for them but the team has retained its strong attack and even better defense.

Hapoel Beer Sheva are one of the traditionally strongest teams in Israel and have a lot of experience in such tournaments. They have great potential and a spectacular manager that has established a very specific style of play. Hapoel are extremely effective in attack and have also the best defense in the country. Their stats last season for the 2nd place were 39:17 in 26 rounds. 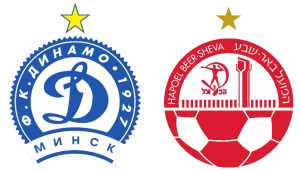 This fixture will actually be played in Israel although Dinamo are the actual host and that is due to the war between Russia and Ukraine.