Drogheda United will be eager to continue the home unbeaten sequence when they take on Derry City on Friday, 19 August. The Red and White Army are also on an undefeated streak.

The Drogs have shown discipline in recent games and scored with an average of two goals per game in the last five attempts. On the contrary, Derry City have also found the back of the net eight times in the previous five visits, scoring at least twice in three of them. Furthermore, the teams didn’t secure more than one clean sheet in their recent home and away games respectively. So a high-scoring total will be our next prediction for this game.

Drogheda United are expected to have many opportunities at their home stadium as they have rattled the net in four of the last five hosting games. In opposition, the Red and White Army have also been consistent in this regard and missed the target only once in the previous six away outings. Adding more, four of the last five H2Hs at the home of the Drogs featured BTTS outcomes. Hence, we believe to see both teams scoring at the same time in this game.

After a long wait of four games, the Super Drogs earned a league victory in the last game at home against Shelbourne. But Drogheda United have won only seven games in the 27 attempts and stands in the eighth position in the standings. The club gaffer Kevin Doherty will have zero fitness issues to report before this duel.

The Candystripes ended their consecutive second game in a draw previously against Shamrock Rovers by 0-0, playing at home. However, 12 wins and nine draws have got the team to third place on the points table after 25 games. All of the players will be ready to make an appearance in this game.

FAQs regarding Drogheda United vs Derry City Coverage and Accessibility 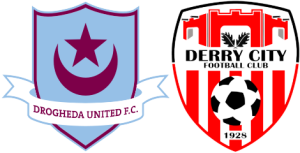 Where is the game being played? Head in the Game Park (Drogheda).
Who won the last Head to Head fixture? Drogheda United and Derry City played a 1-1 draw.
When is the match scheduled? The match will take place on 19 August 2022 at 19:45 GMT.