Dundalk and Vitesse are level at 2-2 ahead of their Europa Conference League qualification second-leg tussle on Thursday. Read our free predictions and find the top odds for the clash below in our expert match preview.

Can Irish side Dundalk pull off a major shock against Eredivisie outfit Vitesse in the Europa Conference League? Read our top three predictions for Thursday’s contest below.

Dundalk’s 2-2 draw with Vitesse in the Netherlands last week was the very definition of a smash and grab result after the Irish side mustered just seven attempts to their host's 27. Vitesse should have recorded a comfortable first-leg victory over the Lilywhites seven days ago and we’re tipping the Dutch side to grab the win they feel they deserve against a Dundalk team that failed to win four of their last seven games at home.

Dundalk’s goal-scoring efforts at the GelreDome last week were well taken strikes and the Lilywhites – who have found the net for 16 straight matches – should be able to impact the scoresheet again on Thursday. Vinny Perth’s men are unreliable defensively however and having shipped six goals in their last two assignments, a clean sheet against Vitesse looks way outside of their capabilities. With that considered, we recommend backing both teams to score in Ireland.

Dundalk and Vitesse’s first-leg skirmish in the Netherlands was a pulsating end-to-ender in which numerous chances to score were created. It was the fourth time in five fixtures involving Dundalk where over 2.5 goals were notched and with the same set of attackers on show, we’re anticipating more entertainment at the Tallaght Stadium.

Dundalk’s first-leg draw in the Netherlands last week was remarkable when you consider how few chances they manufactured compared to their hosts, though the result was also a reflection of confidence they’ve generated since manager Vinny Perth returned to the club in June. The Lilywhites were thumped 4-1 at home by St. Patrick’s Athletic last time out however in a timely reminder about how much work Perth still has on his hands.

After their fourth-place finish in last season’s Eredivisie, Vitesse were expected to sail into the Group Stages of the Europa Conference League this term, though their frustrating 2-2 draw with Dundalk last week leaves them with a tricky task to complete in Dublin. Vitesse will be without key attacker Loïs Openda for Thursday's crucial encounter after the Belgian was sent off in last week’s first-leg.

Top Betting Odds and Stats for Dundalk vs Vitesse 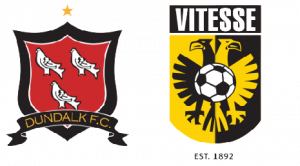 Who will referee Thursday’s game?