Dunfermline face Inverness in a crucial fixture in the Scottish Championship. Two teams with completely opposite ambitions this season and in desperate need of the three points. Which side will prevail on Saturday?

The favorite for this game is set and obvious – Inverness are one of the teams that will get promoted or at least reach the promotion play-offs at the end of the season. On the other side – Dunfermline have to fight for their place in the league next season.

Even with the obvious difference between these two teams, Dunfermline have been one of Inverness's most difficult opponents. Most games between these two teams end with few goals although we sometimes a rare over 2.5. Overall, Dunfermline are the team that has had the most over 2.5s this season but this fixture, like all previous head-to-heads, will be a difficult match for both teams and we do not expect to see a lot of successful attacks.

As mentioned above, Inverness have been struggling in their games against Dunfermline even though the hosts are at the bottom and the visitors on the opposide side of the table. The teams played twice already this season and both results went in favor of Dunfermline – a 0:0 draw at home and a 1:2 win on the road. We expect to see another draw here, especially given that both teams have been having a bunch of those throughout the season. When it comes to the visitors, they have had more draws on the road than any other team – 5/10 games. On the other side, Dunfermline have had the most draws at home – 5/11 games.

Inverness are far from the highest-scoring teams in the Scottish Championship. The team has scored only 14 goals in away games this season and this happened in 10 games. Dunfermline definitely do not have a strong defense but for some reason, it seems to hold well against this particular opponent. We expect a low-scoring game, perhaps even a new 0:0 draw, and definitely under 1.5 goals for the visiting team.

Top Betting Odds and Stats for Dunfermline vs Inverness CT

FAQs regarding Dunfermline vs Inverness CT 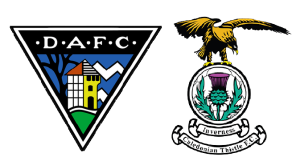 • In which places are Dunfermline and Inverness?

This is a small league with just 10 teams but that doesn't stop it from being extremely competitive and difficult. Five teams are in the fight for promotion currently and Inverness are 2nd in the table with 37 points. Dunfermline, in turn, are at the very bottom – 10th with just 18 points but a good chance for survival as there are three other teams within 3 points.

This match will be played at Dunfermline's home ground – the East End Park stadium, which has existed for almost 140 years and can hold 11,480 spectators.