Darmstadt will be looking to continue the title race when they visit Dusseldorf in the next 2. Bundesliga meeting. Both teams enter the field on the back of league victories.

Dusseldorf are on a beautiful streak of 12 undefeated games and has won two in the last five attempts. On the other hand, Darmstadt has also recorded two consecutive victories ahead of this game but they were beaten in three of the previous six outings. Flingeraner has also been a difficult challenge for Darmstadt in the away outings as the hosts won all of the recent four. The Lilies have also lost two of the last three away meetings of 2. Bundesliga. So we see Fortunen extending their streak with a winning result in this game.

Dusseldorf’s attack has produced incredible numbers with decent momentum, scoring at least in four of the previous five home games and while having a total of 13 goals. On the opposition, Darmstadt also rattled the net six times in the last game. All of the last three H2Hs between the teams crossed the total of 2.5 goals. Following the mentioned reasons, we expect another high-scoring ending in this duel.

Darmstadt has managed to score in all of the recent five league games, securing only one clean sheet in that course. Flingeraner will also be confident over the consistency of scoring in the last seven home games. The last three H2Hs also witnessed both teams on the scoring sides. Hence, we expect the same trend to be followed in this game.

Fortunen got their first away victory since the meeting against Bochum six games ago, having a lead of 1-3against Heidenheim in the last game. With the help of ten wins and 11 draws, Dusseldorf stands at the tenth position on the points table. The manager Daniel Thoiune will have six players out of the game due to medical and suspension issues.

The Lilies scored four goals in the first half of the previous game and thrashed Erzgebirge with a final score of 6-0. After getting back to their winning ways, Darmstadt are just two points behind the table leaders, standing at second. Fabian Schnellhardt is the only player that can’t be considered for this game due to a torn muscle bundle.

Top Betting Odds and Stats for Dusseldorf vs Darmstadt

FAQs regarding Dusseldorf vs Darmstadt Coverage and Accessibility 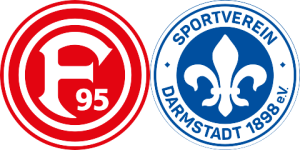 Where is the game being televised? Diema Sport 3, Sky Bundesliga, and Viaplay.

Who won the last Head to Head fixture? Dusseldorf won with a 1-3 scoreline.