Round 15 of the 2. Bundesliga begins with two curious fixtures – Dusseldorf vs Heidenheim and Regensburg vs Dynamo Dresden. With nearly half of the season gone, the second tier of German football has never looked more competitive.

Like most teams on the 2. Bundesliga, Dusseldorf and Heidenheim have had their ups and downs. Despite the small difference in points, these two teams have equal chances for the three points and this fixture gives us plenty of opportunities to win money.

This fixture includes two particularly curious sides. Dusseldorf and Heidenheim are both in the middle of the standings but we should take a look at their home and away performances.

Both teams have one thing in common – they are among the worst in their respective categories. Dusseldorf have won just 6 points at home in 6 games while Heidenheim are the third-worst away team in the league. Due to the accumulation of draws at home, we pick the Draw No Bet option for Dusseldorf. Although their performance at home does not look well statistically, the team has had some promising results in contrast to Heidenheim's losing streak away from home.

Although Dusseldorf have issues on the defensive side of play, few teams have scored more goals in home games this season. We mentioned already that Heidenheim are among the worst visitors and they have been conceding loads of goals per game.

We expect to see at least two goals from Dusseldorf as a start and at least one from Heidenheim, which should be able to take advantage of Dusseldorf's weak defense.

Here is an alternative option for goals – both teams to score in this match. As mentioned already, Dusseldorf score a lot but they also concede a lot. Heidenheim have not scored away from home in three consecutive games, and there is no better chance to change this than a match against Dusseldorf. Here are the “both teams to score” stats for both sides after the first 14 rounds: Dusseldorf – 71%; Heidenheim – 50%.

Top Betting Odds and Stats for Dusseldorf vs Heidenheim

FAQs regarding Dusseldorf vs Heidenheim 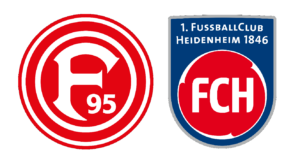 • In which places are Dusseldorf and Heidenheim?

Both teams lost several matches in recent weeks, which gave other competitors a chance to move up in the standings. Currently, Dusseldorf are 12th with 16 points while Heidenheim are 8th with 21 points.

Both teams have a negative goal difference after 14 rounds. Dusseldorf have been the better teams when it comes to scoring goals although they are currently below Heidenheim in the standings. Friday's hosts have scored 19 goals and conceded 21 while Heidenheim have scored 15 and conceded 20.

This fixture has been scheduled for 17:30 UTC on Friday, November 26.

This fixture will be played at Dusseldorf's home ground – the Merkur Spiel-Arena, which has a capacity for 54,000 spectators.