The Egyptian Premier League continues with the 26th round and a match between the Eastern Company and Al Ittihad.

The Eastern Company have been struggling this season and there is not much time left to improve and save themselves from relegation. Here are our predictions for this match.

This is an interesting matchup. The two teams have played only twice in their history and it was this season. Both games ended with less than 2.5 goals. It is rather against the statistics, however, so you should opt for a smaller stake on this market. In each case, Al Ittihad have had mostly games with under 2.5 goals (5 out of 6 most recent matches). On the other end, however, the Eastern Company have conceded a goal in 13 consecutive games.

Despite the fact that the Eastern Company are struggling overall, their latest results are not that bad. In fact, the team has not lost in three consecutive matches for the Premier League and even won two out of three. Al Ittihad have not been much better overall this season and are one of the weakest away teams in the league. They beat the Eastern Company once and also had one draw. We think that this will be the second draw.

We bet for the under 2.5 but both teams to score as well. We think that the most likely result for this match will be the 1:1 draw. The Eastern Company have had a bunch of results with these exact numbers this season, including one such draw against Al Ittihad. Moreover, 6 out of their last 8 games in the league had both teams scoring goals too.

The Eastern Company joined the premier league at the start of this season and of course, there were no expectations for this team. Perhaps they expected more but the team has been one of the weakest in the league and their stats are more than terrible. After 25 games, their goal difference is 22:45 – the worst in the league. There is not much time left for them to improve.

Al Ittihad have always been an average team and rarely contest for the top positions. This season has been worse than usual and the team is barely around the middle of the table. Their goal difference is also quite negative after 25 games – 30:40. Overall, there is just one team with a weaker defense than theirs and it is exactly the Eastern Company. 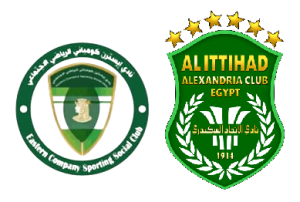 This fixture has been scheduled for Eastern Company's home ground – the Petrosport Stadium in Cairo.