El Gouna and Ghazi El Mehalla will lock horns this Thursday 18th August 2022 in the Egypt Premier. Both teams are in terrible shape ahead of the clash and it will be interesting to see how the game ends on matchday.

A 2-1 victory for Ghazi El Mehalla in the reverse game begs the question; will they make it six points from El Gouna this season? Here is how we expect the game to end on Thursday:

These teams have been underwhelming in scoring goals lately. They both scored two goals in the last five games. We would have expected a higher scoreline if they were playing against stronger opponents but lack of firepower on both sides means under 2.5 goals is possible in this clash.

There are defensive concerns on both ends. The hosts leaked 10 while El Mehalla conceded five times in the last five games. We expect goals on both sides.

This will likely be a less entertaining match given how the teams have struggled in recent games. We are tipping the teams to settle for the spoils at full-time.

A winless run in five consecutive Egypt Premier League games is all El Gouna has to show for their preparedness ahead of this clash. The hosts have failed to demonstrate their ability to score after failing to do so in three of their last five matches and only found the net twice in two games within that time. Poor defending has seen El Gouna leak 10 goals in their last five games, indicating the possibility of leaking at least twice in this upcoming match.

Ghazi El Mehalla has had its ups and downs in recent games. The visitors failed to win a game in their last two outings and come to this clash with only one win, and one draw in the last five league assignments. With only two goals scored in the last five and a total of five goals leaked during that duration, Ghazi El Mehalla equally had defensive problems but not in a worse situation as El Gouna.

For the latest stats for El Gouna vs Ghazi El Mehalla as well as the current team form and h2h information, check the tables below. 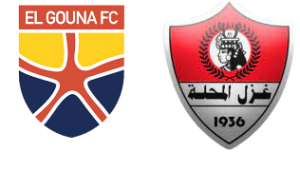 El Gouna will host the game at Khaled Bichara Stadium. The stadium can host up to 12, 000 people.

How did these teams fare in the last duel?