Regensburg finally managed to not lose after a long series of defeats but that 0:0 was not a huge improvement. The team has a better chance to improve now against Erzgebirge Aue, who are at the bottom of the league.

Regensburg were once one of the top teams in the league but they lost seven out of their last ten games and have lost their chances for promotion at this point.

In earlier stages, we would bet against this but with the current state of both teams, we expect to see a lot of goals between them. And actually, these teams have a lot of history and most of the games they played had a bunch of goals. For instance, six out of the last eight head-to-head games had both teams scoring goals. At the same time, Aue had more than 2.5 goals in 7 out of their last 8 league games while Jahn Regensburg had over 2.5 goals in 6 out of their last 8. Overall, this is a good chance for both teams and we expect a high-scoring game.

We see this match as a likely draw but for additional safety, we pick the double chance including Erzgebirge Aue. Neither side here looks like a team that could dominate in any game, so it doesn't matter if you pick this double chance or the one with Regensburg. We simply believe that Regensburg have been absolutely terrible home and away and they will have struggles even against Aue. For example, the previous match that ended in a 0:0 tie was against Dusseldorf at home and still, Regensburg had fewer chances and looked weaker.

This is an incredible line given that Erzgebirge Aue are the team that has taken the fewest corners this season. Overall, the team took an average of 3.50 corners per game in all their games, which is way below our line here. In their recent five home games, all defeats, they took even less – only 2.60 corners per game. You can generally opt for the overall corners market here too as Regensburg have also not taken a lot of corners this season – just 4.88 per game on average, but we think that the individual line for Aue is worth more. 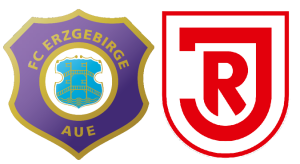 • In which places are Erzgebirge Aue and Jahn Regensburg?

Erzgebirge Aue have been in the relegation zone since the start of the campaign and it doesn't look like they have any chances to survive – 17th with 16 points. Regensburg were in the top three but have since fallen to 10th place and have just 32 points compared to the 45 at the top.

This match will take place at Erzgebirge Aue's home ground – the Sparkassen-Erzgebirgsstadion.