Exeter and Barrow lock horns at St. James’ Park in Devon on Tuesday. The Grecians have their eye on retaining the second place in League Two this weekend. Read our free predictions and find the latest odds for the fixture below in our detailed match preview.

Exeter have been extraordinary this season and with one more bad result from Forest Green, they might even contest for the championship.

Exeter have been the best team in the league over the last couple of months and this is particularly connected to their strong performances at home. In front of their own crowd, Exeter are on a run of 10 games without a defeat, of which they won eight. Their performances have been extraordinary and even with the improvement from Barrow's side, we expect the home win.

Exeter to Win to Nil

While Exeter did concede some goals in recent home games, the Grecians did manage to keep clean sheets in most of their victories at home this season. Overall, they have conceded only 17 goals in 22 games at home.

City have shut out their opponents six times in their last eight matches overall and a robust Exeter outfit are worth backing to keep Barrow – who are averaging less than a goal per game on the road this term – off the scoresheet.

Exeter had their shooting boots on in midweek when they rattled four goals past Harrogate at St. James’ Park and only and only three clubs have plundered more efforts at home in League Two than the Grecians in 2021/22.

Exeter have already scored two or more goals in a game in most of their separate occasions at home in the fourth tier since August and they look a solid option in the over 1.5 team goals market again when Barrow land in Devon.

Exeter returned to the wins in their last fixture during the weekend and beat Rochdale with 2:0. This result was a major confidence-builder and the Grecians have moved to within three points of the current leaders in the table – Forest Green. Exeter's last couple of games will not be a serious challenge for their form and with a big dose of luck, we might see the greatest upset in the history of League Two and a triumph for Exeter.

The season is more or less over for Barrow – they saved themselves from relegation and even if they lose the remaining three games, Oldham have no chance to reach them with one game less. Surprisingly, the last two weeks have been the best for Barrow this season but this is mostly connected to the reduced efforts of their opponents.

Top Betting Odds and Stats for Exeter vs Barrow 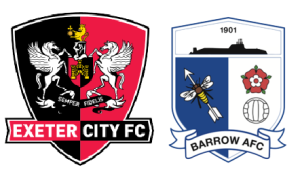 Exeter and Barrow drew 0-0 when the teams last met on August 17th.

Exeter are clear favourites to secure the victory at Barrow’s expense this week.