Exeter host Tranmere at St. James’ Park in League Two on Saturday. Can the title-chasing Grecians claim three points at Rovers’ expense? Read our free predictions and find the latest odds for the fixture below in our detailed match preview.

Exeter welcome Tranmere to Devon for a League Two tussle on Saturday. Read our top three predictions for this weekend’s fixture below.

After a return of just one point from their last three fixtures in League Two, promotion-chasing Exeter will be determined to get back to business this weekend and we’re backing the Grecians to harness home advantage against Tranmere. Exeter’s 2-1 reverse at home to Northampton on Tuesday was their first league defeat at St. James’ Park this term and they had won three on the bounce there before their midweek setback. Rovers meanwhile, have won only twice in their last 12 attempts on the road in fourth tier, so side with the hosts here.

Exeter have been pocketing plenty of points at home this season, though clean sheets have been much hard to come by. Indeed, both teams found the net in each of their last six league assignments in Devon and the same market could be worth pursuing when City take on a Tranmere outfit that has registered in all but one of their last five away skirmishes.

Exeter’s most prominent forward Matt Jay is in the midst of a dry spell, though his teammate Pádraig Amond has been doing his best to pick up the slack. The veteran Irishman has notched twice in his last three league appearances for City and the 33-year-old found the net against Northampton on Tuesday evening. With his finishing on point, we recommend backing Amond in the anytime scorer stakes again this weekend.

Defender Thim Dieng, midfielder Nigel Atangana and forward Sam Nombe are all expected to sit out Saturday's game for Exeter. The Grecians were toppled at home for the first time this season at St. James' Park on Tuesday when they were beaten 2-1 by Northampton. Still, City are still just two points outside the automatic promotion places in the fourth tier.

Tom Davies and Scott Davies are listed as Tranmere's only injury concerns ahead of their trip to Devon this weekend. Rovers carved out a 1-0 victory at second last Oldham on Tuesday, though they needed a last-minute effort from Charlie Jolley to nab the points. Micky Mellon's charges have claimed seven points from the last nine available overall, though they have had a kind run of fixtures.

Top Betting Odds and Stats for Exeter vs Tranmere 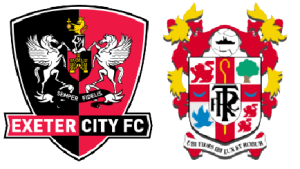 Tranmere beat Exeter 2-1 when the teams last met on March 20.

Exeter are the bookies favourites to prevail against Tranmere on Saturday.