Fatih Karagumruk have been quite impressive since the start of this campaign. In general, this season in the Turkish Super Lig has given us unexpected results. The usual contenders are already quite behind in the standings and we might see a brand new champion unless Besiktas, Fenerbahce and Galatasaray step up their game.

Fatih Karagumruk joined the Super Lig only last season and quickly became one of the surprises of the season. This year, the team plays even better and their home performance has been fascinating. Will Galatasaray manage to get something out of Karagumruk, or will the home team take another 3 points and join the teams on top?

Karagumruk have not lost a home game since March this year. Their performance has been incredible given that the team got promoted to the Super Lig at the beginning of last season. Not to mention that they are among the highest-scoring teams already. Galatasaray are underperforming away from home and have won just 2/6 matches. Last season, Karagumruk won at home with 2:1 and we expect them to at least not lose this season as well.

At this point, we can generalize and say that Karagumruk and Galatasaray are quite leveled. We are certain that the hosts will score at least one goal and it will be surprising not to see Galatasaray with at least one as well. Their performance away has seen almost the highest average number of goals per match (3.5) and they have scored more than all teams but one. With 10 goals in 6 away games, we expect Galatasaray to score. It should be mentioned that apart from the 10 goals scored, Galatasaray have allowed their opponents to score 11. We have every reason to expect that we will see both teams score.

The line is high and the odds are high too but there is a good reason we believe that there will be 10 corners in this match. Both teams need the three points. Perhaps, based on their status in the league, Galatasaray have to be more motivated but Fatih are not to be neglected. Both teams play well and score a lot of goals and this attacking football often leads to numerous corners per match. For instance, here are the all-season averages for both teams: Fatih Karagumruk – 4.45 average corners per match; Galatasaray – 6.36 corners per match.

Top Betting Odds and Stats for Fatih Karagumruk vs Galatasaray

FAQs regarding Fatih Karagumruk vs Galatasaray 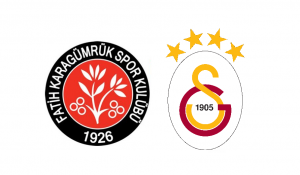 • Who will miss the match for Fatih Karagumruk?

Sunday's hosts have listed three players as either missing or questionable for this game. These are defender Alparslan Erdem, defender Rayyan Baniya, and forward Yannis Salibur.

• Who will miss the match for Galatasaray?

• In which places are Fatih Karagumruk and Galatasaray?

Both teams are near the promotion zone for the European tournaments but need more points. Fatih are 8th with 18 points while Galatasaray are 6th with 20.