FCSB aim to get back on the winning sequence when they host Saburtalo Tbilisi in the second leg of Europa Conference League Qualifiers on Thursday, 28 July. Red Eagle have got the back of consecutive two victories.

FCSB enter this game after consecutive two away defeats but they have earned an undefeated streak of six home games. The Red and Blues have also won five of the last six hosting attempts. On the other hand, Saburtalo won the last two in a row but they have failed at away outings. Red Eagles registered only one victory in the last five visits, losing two of them. So we expect FCSB to fancy their chances in front of their home fans.

The Red and Blues couldn’t add a huge total in the recent overall outings but they have managed to get an average of three goals per game in the last five home attempts. In opposition, Saburtalo has also found the back of the net nine times in the previous five appearances of different competitions. Red Eagles also leaked six goals in the last four visits. Therefore, we predict this game to witness a total of over 2.5 goals.

FCSB have not missed the chance to hit the target in any of the last six home outings. Saburtalo also found the back of the net in four of the last five attempts. Furthermore, Red Eagles hit on the target in all of the previous three away outings. The visitors will also be optimistic in this regard as the Red and Blues have leaked the goals in all of the last three outings. Hence, a BTTS outcome will be the most probable result for this game.

The Red and Blues didn’t get a good start to Liga 1 and played the consecutive second winless game previously, losing by 2-0 against Rapid Bucuresti. FCSB were second in the Romanian league to confirm their place in this competition. Iulian Cristea and Ionut Pantiru will be out of this game due to fitness concerns.

Red Eagles got their second consecutive victory of this tournament in the last game and confirmed the lead of 1-0 against FCB. Saburtalo were down to 0-1 in the first leg of the previous round but made it into this round after winning the second leg on penalty shoot-outs. The club gaffer Lasha Nozadze will have zero fitness issues before this game.

Top Betting Odds and Stats for FCSB vs Saburtalo

FAQs regarding FCSB vs Saburtalo Coverage and Accessibility 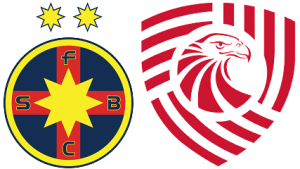 Where is the game being played? Arena Naționala (Bucharest).

Who won the last Head to Head fixture? Saburtalo won with a 1-0 scoreline.