This preview looks at the Turkish league meeting involving Fenerbahce and Antalyaspor at the Sukru Saracoglu Stadium. This is a fixture where Fenerbahce have been unable to exert a lot of dominance in recent years.

Fenerbahce were able to pick up a narrow 1-0 win over Adana Demirspor thanks to former Arsenal midfielder Mesut Ozil’s goal. In the midweek action, Fenerbahce secured a 1-0 aggregate lead over HJK in the Europa League qualifiers. Antalyaspor were held to a 1-1 draw by Göztepe in their opening league match.

Fenerbahce to win the game

Fenerbahce come into this game after having picked up two solid victories from the opening competitive games. Even though the team has a difficult record against Antalyaspor with only two wins from the last five competitive games, Vítor Pereira will be looking to keep the club’s momentum going. Antalyaspor were held to a draw in the opening match but they do not have the distraction of midweek games. Even with the crucial second leg of the Europa League qualifiers against HJK looming around the corner, Fenerbahce can win this match.

The two rounds of the competitive games experienced by Fenerbahce this season have been very tight on goals. Both have been won by a 1-0 margin. Antalyaspor are likely to make it hard for Fenerbahce, who may be going for a conservative approach once again. In recent years, this fixture has witnessed an even split between high and low scoring matches. This time around, it may be the latter.

More goals in the second half

Both goals scored by Fenerbahce so far this season have come in the second half. Even though the team are likely to take it slow if they have a good position going into the break, there is a good reward for backing more goals in the second half.

The season has begun a positive fashion Fenerbahce, who have been able to win the opening game of the domestic campaign followed by the success of the first leg of the Europa League qualifiers. The latter be treated with a great deal of importance by the club, as they are quite close to securing a spot in the group stages. There are no injury problems for manager Pereira.

Antalyaspor are searching for the first win of the season after being held to a draw in the opening game. The team had a lowly 16th place finish last season with 14 matches ending in a defeat. However, the start made for the 2021-22 campaign is comparatively good. Manager Ersun Yanal only has Dogukan Nelik unavailable due to injuries.

Top Betting Odds and Stats for Fenerbahce vs Antalyaspor

FAQs about the Fenerbahce vs Antalyaspor game 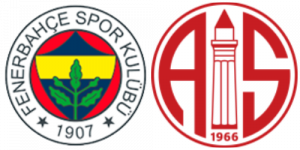 Where is the match scheduled? Sukru Saracoglu Stadium

Which team is the favourite to win? Fenerbahce