Feyenoord face Partizan for the second time after the 1st leg last week had a whopping 7 goals. What will happen in the 2nd leg fixture?

With three goals ahead, Feyenoord should feel quite safe in this second fixture and we expect to see less offense. This match will be unexpected.

Perhaps this bet surprises you but this is a common occurrence after a match with half a dozen goals. With seven goals and a three-goal difference before the start of this fixture, there is a good potential that we will see strong defense from Feyenoord and few to no goals at all. It is true that both teams are strong in their domestic leagues and score a lot of goals but we expect to see a surprising result here.

Partizan started the first leg better than Feyenoord although they lost in a terrible way after all. Since Feyenoord have nothing to play for at this point and there is no reason for them to be attacking, we expect Partizan to be the more active team at the start once again. Perhaps they will score a goal or perhaps we will see a 0:0 draw at half-time. In each case, we expect Feyenoord to be on the defense at the start.

The 1st leg fixture of this game had nine corners at full time and we generally expect to see a similar number as a minimum. Both sides take a considerable number of corners and will certainly have enough chances in this match too. Overall, Feyenoord took 7.67 corners per game at home over the last five European home games. On the other side, Partizan have taken an average of 4.75 corners per game in their last 5 European outings.

Feyenoord have been a worthy rival of Ajax and PSV Eindhoven but the best they could get this season will be third place. Nevertheless, they have not lost a lot of games this season and their recent performances have been good too – only one loss in the last five league games. They score a lot of goals overall and they showed it in the 1st leg.

The dominance of Partizan and Crvena Zvezda in the Serbian elite continues this season and the teams have the same number of points after 27 rounds. Partizan have been extraordinary in their domestic league and have lost just once this season. They have an incredible defense that has conceded 9 goals in 27 rounds. They have also been quite good in the ECL before this devastating loss in the previous game.

Top Betting Odds and Stats for Feyenoord vs Partizan Belgrade

FAQs regarding Feyenoord vs Partizan Belgrade 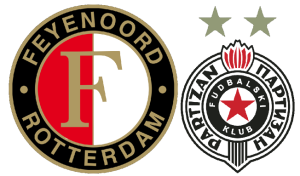 Which players will miss the match for Feyenoord?

Which players will miss the match for Partizan?