Two of the Irish Premier Division’s bottom three face off when Finn Harps welcome Waterford to Ballybofey. Read our predictions and find the latest odds for the game below in our expert match preview.

Finn Harps are hoping to break a miserable six-match winless run when they take on second from bottom Waterford. Read our top three expert predictions for Friday’s fixture between Finn Harps and The Blues below.

Finn Harps are nursing their bruises following a run of six games without a win though they are worth backing to halt their slide against Waterford. Harps have beaten the Blues in each of the clubs’ last seven encounters and with that record pushing them on they look good value at the prices available.

Both teams to score backers could well be rewarded this week if Finn Harps’ and Waterford’s recent records are anything to go by. Eight of Harps’ last nine games produced goals at both ends while BTTS landed in four of Waterford’s last five assignments. In addition, three of the last four skirmishes between these clubs delivered goals at either end so stick to the same market this week.

Encounters between Finn Harps and Waterford have generally been entertaining affairs in recent seasons. Indeed, three of the last four tussles between them produced three or more goals. Both defences rank among the Irish Premier Division’s bottom three this term, so expect more goals again in Ballybofey.

After a bright start to the campaign, Finn Harps have started to wilt badly and their return of just one victory from their last ten Premier Division fixtures suggests that confidence is low. Long-serving manager Ollie Horgan knows how to get the better of Waterford however and Harps will be determined to add to their string of seven straight wins against The Blues on Friday.

Waterford had been showing signs of life under newly appointed manager Marc Bircham, though their 2-0 reverse at Derry City last week was a real setback. Still, progress has been made in their battle to beat the drop and Waterford have opened up a four-point buffer between themselves and bottom club Longford since Bircham’s arrival.

Top Betting Odds and Stats for Finn Harps vs Waterford 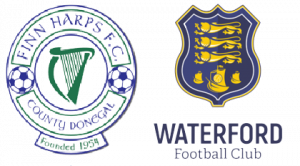 Friday’s fixture will be played at Finn Park in Ballybofey.

Finn Harps have beaten Waterford a huge seven times in a row and they are priced as favourites as a result.