Flora take a third stab at making the cut for a continental competition when they meet Shamrock Rovers in the Europa Conference League qualifiers. Read our expert predictions and find the best odds for the clash below in our match preview.

Flora and Shamrock Rovers meet in Estonia for the first-leg of their Europa Conference League Playoff tie. Read our top three predictions for Thursday’s clash below.

Shamrock Rovers are on the cusp of making history and they enter their Europa Conference League in superb form. The Hoops have won each of their last eight matches in all competitions and three of those successful assignments were in European competitions. Flora meanwhile, are in the midst of a six-match winless streak and in-form Rovers look an excellent price in the double chance market as a result.

Rovers have been building a powerful head of steam of late thanks to their sound defensive performances. With their ability to keep things tight at the back key, five of their last six games have produced under 2.5 goals and the same line appeals when the Irish champions take on a Flora team that has registered only twice in their last five fixtures combined.

Rovers’ results have been top-notch over the past two months, though they often take some time to get going in games. Six of the last eight goals they hit in their last five matches were notched after the half-time interval and that same habit of kicking into gear after the break opens up an opportunity in the highest-scoring half market on Thursday.

Estonian outfit Flora will be hoping that it’s third time lucky on the continent having come up short in both the Champions League and Europa League qualifiers this season already. Worryingly for coach Jürgen Henn, the goals have completely dried up for Flora ahead of this week’s first-leg clash with Shamrock Rovers however, and the Triibulised have failed to score in four of their last five tussles.

Shamrock Rovers eased past Teuta Durrës in the previous round of Europa Conference League qualifiers, keeping two clean sheets in the process and the Dublin-based club will arrive in Estonia armed with plenty of confidence as a result. With nine wins from their last ten assignments  in all competitions behind them, Rovers are stepping on the gas domestically and in Europe.

Top Betting Odds and Stats for Flora vs Shamrock Rovers 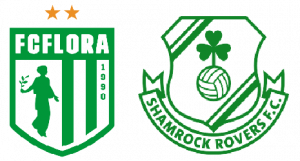 Thursday’s game will be played at the A. Le Coq Arena in Tallinn.

The bookmakers are finding it difficult to split Flora and Shamrock Rovers this week and both clubs enter Thursday’s first-leg as joint-favourites to win.