Forest Green and Carlisle battle it out for three points in League Two on Saturday. Table-topping Forest Green can extend their lead at the summit with another victory this weekend. Read our free predictions and find the latest odds for the fixture below in our detailed match preview.

Carlisle put their five-match unbeaten run on the line when they visit league leaders Forest Green at The Fully Charged New Lawn. Read our top three predictions for this weekend’s fixture below.

Forest Green have pulled away from the chasing pack in League Two and the title favourites have gone an impressive 13 games without defeat in the fourth tier. Rovers have won four of their last five at home without conceding a single goal and they have enough quality in their ranks to sink a subpar Carlisle outfit at The Fully Charge New Lawn this weekend.

Forest Green (48) are the most prolific team in League Two this term and Rovers are averaging 2.0 goals per game so far. Rob Edwards’ side have notched at least twice in five of their last six assignments on home soil and having already put two goals past Carlisle once this season, we’re tipping the champions-elect to do it again on Saturday.

Jamille Matt is on course to eclipse his best-ever haul for a single campaign this season and the Forest Green frontman can register his 16th League Two strike of 2021/22 against Carlisle on Saturday. Matt was among the goalscorers when Rovers turned United over in Cumbria back in October and the 32-year-old has the class to punish the same defence in Saturday’s rematch.

Forest Green enjoyed some extra rest in midweek when their clash with Mansfield was called off due to fog on Tuesday, so expect to see an energetic Rovers against Carlisle as a result. The league leaders have enjoyed a 66.6%-win rate at home this term and they have lost just twice in 24 League Two fixtures overall this term.

Carlisle are in the midst of a decent five-game unbeaten run in League Two though that surge could come to a shuddering halt against a formidable Forest Green side this weekend. The Cumbrians have already lost seven out of 12 away tests since August and manager Keith Millen will need to conjure up an incredibly effective tactical blueprint to outthink his counterpart Rob Edwards on Saturday.

Top Betting Odds and Stats for Forest Green vs Carlisle 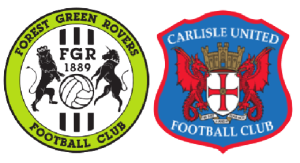 Forest Green are clear favourites to put Carlisle to the sword this weekend.

What position are both teams in the league?

Forest Green occupy top spot in League Two while Carlisle are currently down in 19th place.