Forest Green will host Harrogate in arguably their most important match of the season on Saturday.

There is a real chance that Forest Green could lose the title of League Two after spending the entire season at the top of the league.

Forest Green have been having real struggles and their defense is definitely not as impressive as it was in the earlier stages of the season. Nevertheless, their home performances remain positive and they rarely concede goals in them. More importantly, we have Harrogate, which have been terrible on the road lately. The visitors managed to score a goal in one of their last five outings in the league.

The odds for the Forest Green win are rather low, so we will opt for the over 1.5 goals for them instead. Forest Green are the highest-scoring team in the league this season and although they have had their struggles lately, they will face Harrogate, who conceded at least two goals in four of their last five games in the league. This is one of the teams with the weakest defenses and with the importance of this match, Forest Green should score at least twice.

There was no doubt that Forest Green would be the champions of League Two at the end of this season. They had a double-digit lead in front of all other teams but the past three-four months have been difficult for them. Now, after a new series of winless games, Exeter have equal points to them but a worse goal difference. Forest Green need to win both of their remaining games if they want to win the league.

Harrogate had a disappointing season but they gave us some of the most impressive matches of the season in terms of goals. Their attack is shockingly strong but their defense is actually the second-weakest in the entire league. After 44 rounds, they have a goal difference of 61:72. If they improve their defense in the summer transfer window, they will be a serious contender next year.

Top Betting Odds and Stats for Forest Green vs Harrogate

FAQs regarding Forest Green vs Harrogate 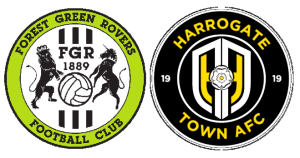 In which places are Forest Green and Harrogate?

Obviously, Forest Green are still at the top of the table but this will change if they fail to win this crucial fixture. Harrogate are on the opposite end of the table at 19th place with 50 points after 44 games.

This match has been scheduled for Forest Green's home ground – The New Lawn.