Forest Green take on Oldham in the 43rd round in a fixture that appears to be their most important match this season to date.

Forest Green had a shocking defeat with 4:0 in the previous round and unless they win this match, they will lose their position at the top after spending the entire season as the absolute best team in the league.

Even though Forest Green are one of the teams with the fewest games with over 2.5 goals this season, we expect to see a goal-packed game on Monday. There are those matchups that for some reason always have a lot of goals and Forest Green vs Oldham is one of them. All three of the last h2h games ended with more than 2.5 goals and check out the result from earlier this season – 5:5 at Oldham's.

The match result odds are not good when it comes to the win for Forest Green, so we will go for an alternative option – over 1.5 goals for Forest Green. While we do not expect to see 10 goals like in the previous game between these two teams, we expect to see at least 3-4 with goals from both sides. The over 1.5 for Oldham is also a good idea for a smaller stake at the massive 4/1 (5.00) odds. Given Forest Green's performances, it might actually happen.

Forest Green were dominating the league for the better part of the season and then, their form suddenly disappeared. The team had a solid lead of 15+ points at the top and it seemed like they would win the championship a month or more before the end of the season. Now, however, they are just 2 points above the second in the league and won just 3 of their last 10 games.

Oldham have been one of the weakest teams in the league these past couple of months and their results have truly been terrible. If we put the two recent wins against bottom teams, they lost eight of their last 10 fixtures in the league. Their attack has been struggling with goals while their defense conceded at least 2 goals in 7 out of their last 10 games. Forest Green should easily score multiple goals if they find their true form.

Top Betting Odds and Stats for Forest Green vs Oldham

FAQs regarding Forest Green vs Oldham 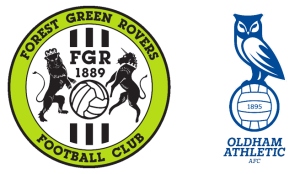 In which places are Forest Green and Oldham?

Obviously, Forest Green have been at the top throughout the entire season but this might actually change if they fail to win this fixture as the 2nd and 3rd in the league are in top form. Oldham, in turn, remain in the relegation zone and are now 23rd with just 37 points.

This match has been scheduled for Forest Green's home ground – The New Lawn.