There is hardly any doubt about the final winner of League Two this season – Forest Green have been extraordinary and lead with 10 points with 3/5 of the season already gone. Now, they face Rochdale – a team that has no chances for promotion at this point.

Forest Green beat Rochdale once this season already and it will be a surprise not to see them win again in this fixture. Rochdale often have draws but will they be able to snatch a point against the absolute best team?

The first game between Forest Green and Rochdale ended in a 1:2 win for FG but we do not expect to see Rochdale score in the second fixture. It is true that they have not been as bad on the road as it may seem but it is just that Forest Green are too good at home. The hosts conceded only 9 goals in 14 home games and in most cases, they did not concede even one goal. For example, they did not allow any goals in their last 7 home games, which is incredible. Rochdale have an almost impossible task in this fixture.

One of the coolest things about League Two is that the odds are never low no matter how better one team is. Forest Green are incredible and yet, we have some good odds for their win. They won 10 out of 14 home games this season. On the other side, Rochdale only won three out of 14 away games and overall, their last win on the road was in October. There is a massive difference in class between these teams and we expect an easy win for the home team.

Top Betting Odds and Stats for Forest Green vs Rochdale

FAQs regarding Forest Green vs Rochdale 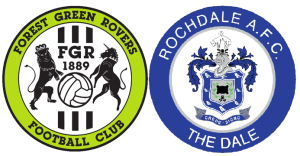 • In which place is Rochdale?

We mentioned several times that Forest Green are the top team but what about Rochdale? The visitors have had a disappointing season mainly because of their large number of draws – 12 in 26 games which is the tied-most in the league. They are 18th currently with 30 points.

• How many goals did Forest Green score and concede this season?

Forest Green have outscored all other teams by a huge number of goals. The hosts scored 58 in 28 fixtures while the second-best in the league is just 46. At the same time, they conceded just 22 goals overall and 9 in home games.

This match has been scheduled for 19:45 UTC on Tuesday, February 8.