High-flying Forest Green host Tranmere at the Fully Charged New Lawn in League Two on Saturday. Read our free predictions and find the latest odds for the fixture below in our match preview.

Forest Green are hoping to extend their lead at the top of the League Two standings when they take on Tranmere in Gloucestershire. Read our top three predictions for this weekend’s fixture below.

After their first wobbly spell of the season in late August, Forest Green have rediscovered their swagger in recent weeks and the league leaders have claimed seven points from the last nine on offer. Rovers won 4-0 at Stevenage at the weekend in a classy, statement display and back at The Fully Charged New Lawn, the title contenders look a solid price to inflict Tranmere’s third-straight defeat on the road on Saturday.

Tranmere haven’t exactly set pulses racing in League Two this term and 100% of their eight matches in the division so far have returned under 2.5 goals. Rovers have yet to score a single goal in 360 minutes of action on the road since the summer, though Tranmere conceded only twice during the same away tests. The visitors’ risk-averse approach should ensure that Saturday’s clash with Forest Green is another fixture decided by slender margins and we advise sticking to the under 2.5 line as a result.

Jamille Matt is firmly back on the goal-scoring trail and the Forest Green hitman notched in each of his last two League Two appearances for the club. The 31-year-old will be gunning for the golden boot in England’s fourth tier this season and Matt is available at a generous price to make his mark again against Tranmere.

Defender Udoka Godwin-Malife is Forest Green manager Rob Edwards' only major injury concern ahead of Saturday's fixture. Edwards will hope to see more from dynamic duo Matthew Stevens and Jamille Matt who have scored an impressive 11 goals between them in League two this term, including two of Rovers' four goals at Stevenage last week.

Tranmere's first-choice keeper Joe Murphy is still out of action, while key midfielder Callum McManaman is considered doubtful for Saturday's clash. Rovers scored twice for the first time this season against Salford last weekend, though they benefitted from an early penalty kick for themselves and an early dismissal for City en-route to their 2-0 triumph.

Top Betting Odds and Stats for Forest Green vs Tranmere 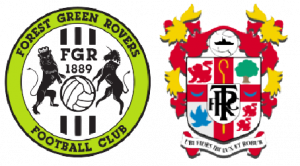 Which player should I look out for on Wednesday?

Jamaican attacker Jamille Matt is in red-hot form for Forest Green and he will be targeting his third goal in as many games this weekend.

We recommend using William Hill for Forest Green vs Tranmere Rovers on Saturday.