In this final round of the 2020/21 Bundesliga season, we look at the meeting between Eintracht Frankfurt and SC Freiburg at the Deutsche Bank Park on May 22. The Eagles will be looking to end the season on a high after letting their UEFA Champions League ambitions slip in the final five fixtures of the season.

Irrespective of the result, Eintracht Frankfurt will finish in fifth place. On the other hand, SC Freiburg have the chance to make a push for the last available UEFA Europa League qualifying slots. The Eagles will not let their rivals have an easy go at them in Adi Hutter's final match in charge at the Deutsche Bank Park. Freiburg will fancy their chances on the trip given Frankfurt's inconsistent recent form. However, it is difficult to rule in their favour with their forwards misfiring

Freiburg ended their four-match losing streak on the road with a thumping 1-4 victory over FC Cologne. Moreover, four of their last five fixtures have seen three or more goals. Frankfurt's form has not been impressive of late but they have been involved in similar high scoring fixtures. With both sides looking to give their fans something to cheer about in the offseason, expect a high scoring affair with plenty of action in the final third.

While Frankfurt have made significant strides, Freiburg have managed to remain competitive with yet another top-half of the table finish. The last four H2H meetings at the Deutsche Bank Park have seen both sides trouble the scorers. With the Eagles conceding eleven goals with seven in reply and seeing just one clean sheet in their last five outings, there should be action on either side of the pitch.

Compared to their last season's finish, Adi Hutter's men have jumped up four positions and will finish in fifth place. However, they will be left ruing their dismal end to the campaign, which saw them slip out of the Champions League qualifying slots and into fifth place. Nevertheless, there have been positives to take out from the season, especially the return of Andre Silva. The Portuguese has been their saving grace this season, leading the club's scoring charts with 27 goals to his name. Silva will be looking to finish the season on a high, with six goals in his last seven outings.

Eintracht Frankfurt finished last season behind SC Freiburg but a gulf separates them this campaign. However, they can still end the season on a high note with the final Europa League qualifying slot up for grabs. They need the three points on offer to dislodge Union Berlin and hope other results go in their favour. The output of Vincenzo Grifo and Roland Sallai will be integral for the Breisgau Brazilians to achieve their ambitions. The midfielders have been creating and scoring goals for Freiburg all season, and need to deliver one final time in the 2020/21 Bundesliga campaign.

Top Betting Odds and Stats for Frankfurt vs Freiburg

FAQs regarding Frankfurt vs Freiburg Coverage and Accessibility 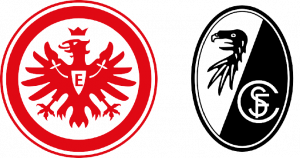 The match will take place at Deutsche Bank Park.

Sky Bundesliga and Viaplay are the places to watch the live broadcast on television. One can also watch the game from the numerous live streams available from bookmakers.