In this betting preview, we look at the Bundesliga fixture between league Freiburg and Bayern Munich at the Schwarzwald-Stadion on May 15. Heading into the final two fixtures, the Breisgau Brazilians are looking to ensure a top-half finish, while Bayern have already been crowned champions.

Bayern Munich to Win Second Half

Hansi Flick's men were crowned champions of Germany for the ninth year in a row with a demolishing job against Borussia Monchengladbach. SC Freiburg also gave a good account of their abilities, matching Bayern's 6-0 win with an impressive 1-4 victory over FC Cologne. However, it is difficult to look beyond the Bavarians, especially with the core of their first team back to action. They scored two in the second half against Monchengladbach and more of the same is expected from them.

In his return to action, Robert Lewandowski hammered three past the hapless Colts last weekend. Nils Peterson and co. were also busy as they piled misery on Cologne's failing attempt at Bundesliga survival. The Over 2.5 has come to fruition in the last three H2H meetings and there is a strong likelihood of it coming true in this Saturday afternoon fixture. With both sides showing efficiency in front of the goal, Bayern more than Freiburg, there should be goals galore in the last German top-flight fixture at the Schwarzwald-Stadion.

One has to go back to early 2020 to find a fixture where Bayern Munich have been shut down in the Bundesliga. Freiburg does not possess the same firepower but have exhibited their attacking prowess in recent weeks. With six goals in their last three home games, Hansi Flick will do well not to underestimate their challenge. Moreover, five of the last six H2H meetings have seen both sides get on the scoreboard.

With two games remaining until the curtain is drawn on the 2020/21 Bundesliga campaign, SC Freiburg still have unfinished business. Christian Streich men are still in the hunt for the last UEFA Europa League slots but will have to negotiate the champions to make it a certainty. With their attackers finding form again, Freiburg will seek inspiration from Mainz to defeat the Bavarians. The win over Cologne saw Vincenzo Grifo maintain his impressive form, scoring his second goal in three games to take his season's tally of nine goals and eight assists.

Despite injury issues that once had as many as eleven first-team players under the medics care, Hansi Flick managed to secure Bayern's ninth successive Bundesliga title. All and sundry were left to waste in this run with the odd defeats keeping their ambitions in check. The record German champions will not be taking the pedal off the metal in their final two games, especially with Robert Lewandowski looking to force his Ballon d'Or contention.

Top Betting Odds and Stats for Freiburg vs Bayern Munich

FAQs regarding Freiburg vs Bayern Munich Coverage and Accessibility 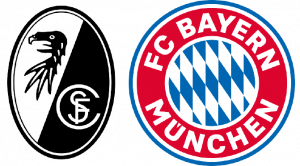