Frosinone face Cosenza in the first of six games on Wednesday. The race for the play-offs is fierce and there are multiple teams with equal points – this game is crucial for Frosinone.

Cosenza won their first time in a while and should be motivated for another good result that will bring them closer to safety. Frosinone are also in danger of losing their key position in the promotion zone.

We have an interesting case of head-to-head games that oppose the current results of both teams and we have decided to go for the bet based on the teams' current performances. For instance, the teams played several head-to-head games and four out of the last five ended with less than 2.5 goals. At the same time, both sides have been having a bunch of games with over 2.5 goals in recent weeks. Five out of five for Frosinone had over 2.5 goals while four out of the last five for Cosenza also had at least three goals. Moreover, the team had goals from both sides in 4/5. All recent h2h games had at least two goals, so if there is a 2.0 line available on your platform, it will also be a perfect choice.

In most cases, an over 1.5 is not a safe bet for the serie B but Frosinone have impressed us since the start of the year and overall. Yes, the team lost some games but their home performances have been incredible. The team scored at least two goals in 3/5 recent home games and in 8 out of 13 games at home overall. Cosenza are one of the weakest away teams and are yet to win their first game on the road. At the same time, their defense has allowed the second-most goals to date – 26 in 13 away games.

We see some impressive stats on Frosinone's side and we think that we will see a lot of corners in this fixture. Frosinone are one of the teams that have taken the most corners out of the entire league this season. Their seasonal stats are 6.42 corners per game on average. At the same time, they had 6.92 corners in their home games alone. And the figures have been even more impressive in recent home games – 7.40 corners on average in their last five matches. On the other side, Cosenza have taken an average of 4.31 corners per game throughout the season and we expect that they will add at least 3-4 for this easy line to win.

Top Betting Odds and Stats for Frosinone vs Cosenza

FAQs regarding Frosinone vs Cosenza 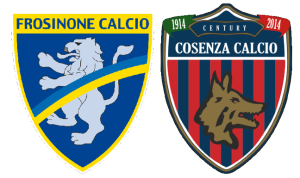 • In which places are Frosinone and Cosenza?

The Serie B standings this season are extremely complicated – half of the league has almost equal chances to reach the play-offs and Frosinone are one of them – currently at 8th place with 41 points. Cosenza have been in the relegation zone for the better part of the season and are currently 17th with 23 points.