Galatasaray and Hataypsor meet in Istanbul on Monday for a Turkish Super Lig fixture. Read our expert predictions and find the best odds for the clash below in our match preview.

Can Galatasaray make it two wins from two at the start of the new Super Lig season when Hatayspor visit the capital? Read our top three predictions for Monday’s fixture below.

Galatasaray opened their account for the new Turkish Super Lig season last week with a comfortable 2-0 triumph at Giresunspor and we’re tipping the title hopefuls to maintain their perfect start at home to Hatayspor on Monday. The Cimbom cantered to a 3-0 victory when Hatayspor last visited the Türk Telekom Stadium and keen to get their home campaign off on a positive footing, Galatasaray are our favourites to win.

Galatasaray have played plenty of threatening football so far this term and The Cimbom managed to find the net a healthy seven times in their last three assignments. Back at the Türk Telekom Stadium for the first time this season, Galatasaray will be keen to put on a show for their supporters and with a focus on attacking football likely again, they look an excellent price in the over 1.5 team goals market.

One of the reasons for Galatasaray’s heightened output in the final third is the form of striker Mbaye Diagne. The Senegalese forward – who spent the back end of last season on loan with West Brom – has hit three goals in his last five appearances for his parent club and Diagne was among the goal-scorers when Galatasaray beat Hatayspor 3-0 last year.

An undercooked Galatasaray were decimated by PSV in the qualification round of the Champions League, though things have been steadily improving since and the Cimbom are unbeaten in four matches ahead of Monday’s game. Manager Fatih Terim has a glut of experienced players to choose from in his squad and his battle-hardened contingent should help Galatasaray to win a lot of points this term.

Hatayspor finished in a highly credible 6th spot on their return to the Turkish top flight last season, defying expectations to mix it with the division’s biggest and best. Only four clubs scored more goals than the Star of the South in 2020/21, though defensively, there are holes to plug and coach Ömer Erdoğan has work to do in that department.

Top Betting Odds and Stats for Galatasaray vs Hatayspor 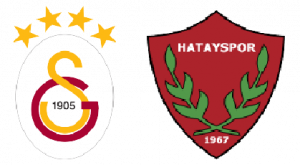 Monday’s game will be played at the Türk Telekom Stadium

Who is favourite to win on Monday?

Galatasaray are the clear favourites to win on Monday and the bookmakers have priced them accordingly.