If one had to choose between J1 League runners up and the team that finished third in the Thai League 1, the automatic choice will be the former. Gamba Osaka are that team but their woeful 2021 campaign has put doubts in their neutrals minds. They are struggling in the relegation slots in Japanese top-flight football. However, we are still going with them to take the three points on offer on account of their seven-match unbeaten run in all competitions. They have a superior squad as compared to Chiangrai United and should be able to claim the three points on offer.

Gamba Osaka has only scored five goals in the J1 League this season, the same tally they have managed against the softer defences they have come across in the AFC Champions League. However, they have only been involved in one fixture where three or more goals were scored. Chiangrai United have a similar record to boast off. We both sides showing a tendency for low scoring fixtures, the result of this meeting will not be any different.

Chiangrai has scored three goals in their three Champions League outings, once every time they went on the pitch. Gamba Osaka has maintained their scoring form on the continent and also added a clean sheet to their stats board. With progress on the line, it looks they will dig deep to hold off their rivals, the only attribute that has been their saving grace in the J1 League this season. Chiangrai managed to get on the scoreboard last time but do not expect them to repeat their heroics this time around.

The 2021 campaign has been full of mistakes and regrets for Gamba Osaka. The Nerazzurri have been disoriented for its duration and needed to address their issues before heading into the second half of the J1 League campaign. The AFC Champions League break could not have come at a better time. They have brought their momentum in cup competitions built against lower league outfits to the continental competition and continued to make progress. They still have an outside chance of progressing to the play-offs, an eventuality they are fighting for as Jeonbuk has set themselves apart from the competition.

The Beetles continue to make quiet inlays into the AFC Champions League. The Thai outfit has impressed in their outings against much tougher rivals and held their own. While the defence has gotten its self accounted for, the same cannot be said about their forwards. The fans would surely rue the missed chances against their group rivals. However, they still have a chance to claim the second spot and enter the lottery to progress as the best second-placed team. This is easier said than done but Emerson Pereira and his charges do not have much else to look forward to than be hopeful.

FAQs regarding Gamba Osaka vs Chiangrai United Coverage and Accessibility 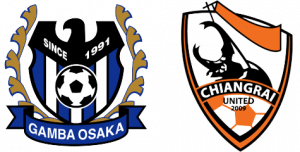 Brazilian duo Patric and Leandro Pareira will need special attention from Chiangrai United. Gamba Osaka will also have to deal with a Brazilian threat of their own as they face Bill in the opposing lineup. The experienced forward has scored 19 goals in all competitions and is Chiangrai United's top scorer this season.

The game is played at the Lokomotiv Stadium in Tashkent.