Gamba Osaka is having a strange season, no doubt. The team that fought for the title last year is now nowhere – in the middle of the table fighting for nothing. Even their opponents, a team that got promoted a few years ago, is higher in the standings.

This year, Gamba Osaka has won two times fewer matches at this point of the season, leaving the team out of chances for anything significant. They are closer to getting relegated than to reach the AFC Champions League. We expect an open match with goals since we are having two teams that have nothing to be worried about.

Gamba Osaka is playing exactly as we suggested in the brief above – without certain limitations. The team's matches end with 3-4-5 goals on both sides. More importantly, Gamba has been scoring goals against stronger sides and not simply conceding. And since their defense is also mediocre this season, we expect that Hokkaido Consadole Sapporo will also score although the team has not been particularly good at this part of the game.

The odds in this game are massive due to the weak position in the table for both teams. Bookies expect that there will be no goals from either side but knowing Gamba's recent performance, we kindly disagree with these expectations. The team's last 4 matches for instance ended in two wins and two losses for the team: wins – 2:1, 4:1; losses – 3:1, 2:3. Obviously, they still remember how to score and at this point of the season, the team has nothing to lose and can afford to play without reservations.

Although there is no way to speak about “form”, we believe that Gamba Osaka is still the better team despite the terrible results this season. Plus, their recent matches confirm the fact. Hokkaido, on the other hand, has been losing match after match (with small exceptions) and in a lot of cases – without scoring a single goal. We believe that Gamba Osaka will not lose and this is our safe bet for the fixture. In case of a draw, our bet will be returned. 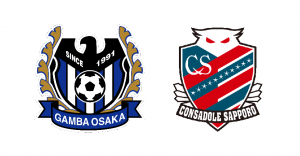 • In which place did Gamba Osaka end last season?

Gamba Osaka finished second in the J1 League last season. Although the fight for the title ended early as Kawasaki Frontale is simply on another level currently, Gamba played a near-perfect season and it is a wonder what happened this year.

• In which place did Hokkaido Consadole Sapporo end last season?

Hokkaido Consadole Sapporo ended around its typical position – 12th. The team got promoted to the J1 League in the 2016/17 season and has since finished 11th, 4th, 10th, and 12th.

• How did the previous head-to-head matches end?

Since Hokkaido returned to the league, the teams have played 11 times. Gamba Osaka has grabbed 6 wins, Hokkaido has won 3 times, and 3 matches ended in a draw.

• How many goals have Gamba Osaka scored at home this season?

Until the most recent matches, Gamba played terribly even at home. The team has only 4 wins in 15 matches and has scored 14 goals.

• How many goals have Hokkaido Consadole Sapporo scored away from home this season?

Consadole Sapporo is not among the good away teams in the league. The team has 4 wins in 14 fixtures and has scored only 12 goals.