Gamba Osaka aims to continue the home unbeaten sequence of the J1 League when they welcome Sanfrecce Hiroshima in the next fixture. Viola are also yet to lose from the last three league outings.

Both Gamba Osaka and Sanfrecce Hiroshima have secured two wins in the last five games of different competitions, along with one draw and two defeats. Viola are undefeated against Nerazzurri in the last two H2Hs but following the current stats of away games, we don’t expect the same for this game. Sanfre are winless in the last four away challenges. Adding more, Black and Blues ended two of the last four home H2Hs in favour of them, losing only one. So we predict Gamba Osaka to take three points at the end of the ninety minutes.

Nerazzurri have found the back of the net seven times in the last five home league outings and scored at least two in three of them. Sanfrecce also enters this field after scoring three goals in the last game, getting a total of eight in the previous five outings. Two of the last three H2H meetings also crossed the 2.5 goals in total. Given this, we see the teams sharing another high total in this duel.

Gamba Osaka were able to score in all of the last four hosting H2Hs against Sanfrecce Hiroshima and didn’t miss the target in the four recent outings as well. Viola’s attack will also be confident to repeat the scoring sequence, being on the scoring side in four of the last five attempts. Two of the last three H2Hs of these teams concluded with BTTS outcome and we predict the identical result for this game.

Black and Blues returned to their away winless track and got a defeat against Cerezo Osaka by 3-1, losing a 0-1 lead in the second half. Gamba Osaka has managed four wins in the 14 attempts of the season and stays at the twelfth of the table with 17 points. The club boss Tomohiro Katanosaka will have to contend with three unavailable players due to injury issues.

Viola got an early lead of 2-0 in the first half and ended the game in a 3-1 triumph against Kyoto in the last game. With the help of five wins and six draws, Sanfrecce Hiroshima are fourth on the points table. Ezequiel and Shun Ayukawa will be out of the field due to an ankle injury and metatarsal fracture respectively.

FAQs regarding Gamba Osaka vs Sanfrecce Hiroshima Coverage and Accessibility 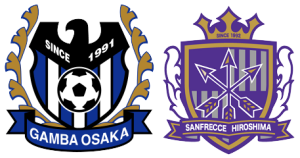 Who won the last Head to Head fixture? Sanfrecce Hiroshima won with a 1-2 scoreline.