Gamba Osaka face Shonan Bellmare in the first fixture of the new round in the Japanese elite on Sunday.

Gamba Osaka had a rough start to the season and have serious problems in defense. Will they struggle against the weakest team in the league?

We have two completely different teams but we expect an equal number of goals from both sides here. Shonan Bellmare are the lowest-scoring team in the league for sure but Gamba Osaka have the second-weakest defense on the other side. Eight of their last 10 games ended with both teams scoring goals while this happened in 5/7 of Shonan's recent games. We think that this will be a goal-packed game.

This is the perfect opportunity for Gamba Osaka to show their qualities and score an easy win against the absolute weakest team in the league. It is actually shocking to see Shonan Bellmare as the favorites to win this match and we think that the reality is completely the opposite. Gamba Osaka will have the usual difficulties but we think that even now, they are the much better team here.

Gamba Osaka struggled last season and their problems have obviously not been solved this year either. The team has great quality but their defense remains extremely weak. They score a lot of goals and almost every game but their defense allows the same high number. After eight rounds, their goal difference is 12:12 which speaks enough.

Shonan Bellmare managed to save themselves from relegation last season with a great dose of luck. They remained one point above the relegation zone and this season, it has already become obvious that they are likely to get relegated. They made no serious improvements in the transfer window and they have been the weakest side in the league to date.

FAQs regarding Gamba Osaka vs Shonan Bellmare Coverage and Accessibility 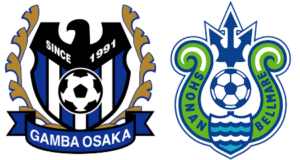 In which places are Gamba Osaka and Shonan Bellmare right now?

After eight rounds in the new season, it has already become obvious which teams will fight for the championship and which will be in the relegation battle. Gamba Osaka are in the middle with 10 points at 11th place while Shonan Bellmare are last with just 3 points after 8 rounds.

This match has been scheduled for the Panasonic Stadium Suita in Suita.