In this article, we will go over the upcoming Gangwon vs Seongnam fixture and what are the top predictions and tips for their match on Saturday.

Gangwon vs Seongnam: Predictions, Odds, and Tips for Saturday

The odds you see here are from SBK and Netbet, so check your bet slip before continuing. That’s because all odds are subject to change.

Looking at the K-League table, we can see a four-point difference between the two teams, and Seongnam is in the lead. Also, in the recent matches for both of them, Gangwon lost or drew all five of their recent matches. On the other hand, Seongnam won or drew four of the last five matches they played. Judging by their most recent form, we don't think that Gangwon would win on Saturday.

Latest Preview & News About the Teams for Gangwon vs Seongnam

Looking at both teams’ match histories in K-League 1 we think that the winner in this match-up will be Seongnam. They won in the last head-to-head fixture they played against Gangwon and that is a plus. The K-League table even shows that Seongnam is dominating Gangwon and they are above them. Right now, the favorite team has a total of two injured players that have missed more than ten games each. Gangwon doesn't have any injuries, but we don't think that will help them on Saturday.

Match Statistics and Histories for Gangwon vs Seongnam

In these tables, you can check out the most recent Gangwon vs Seongnam scores and match histories for their upcoming fixture this weekend.

Prevalent Q&As for the Saturday Gangwon vs Seongnam Match 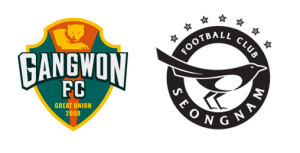