Gent meet Beerschot on Sunday in a Belgian First Division A encounter at the GHELAMCO-arena. Read our predictions and find the best odds for the game below in our expert match preview.

Both Gent and Beerschot are aiming to bounce back from opening weekend defeats when they lock horns on Sunday. Read our top three expert predictions for the clash below.

Gent come into Sunday’s fixture on the back of a troubling week where they conceded two goals in successive games against Sint-Truiden and Valerenga, and their defence looks fragile enough to concede again this weekend. The Buffalos have scored in each of their last three meetings with Beerschot however, so back goals at both ends at the GHELAMCO-arena.

Gent had to travel to Norway in midweek for a continental contest and there could be some tiredness in their ranks on Sunday as a result. Beerschot actually held Gent to a 1-1 draw when the teams last met in January and with greater energy to take advantage of, they stand out at a superb price in the +2 market.

Under 3.5 goals rattled the net in each of Gent’s last two assignments and in Beerschot’s first fixture of the campaign last week and the same line could be worth backing on Sunday. With fatigue a factor for the hosts and Beerschot keen to avoid a second defeat in as many games, this weekend’s tussle could develop into a cagey affair.

Gent’s 7th placed finish last season was their lowest since 2013 and manager Hein Vanhaezebrouck subsequently oversaw a busy summer window as he laid plans for a more productive domestic campaign in 2022/22. However, Gent’s 2-1 opening day reverse to Sint-Truiden was a setback, especially when you consider that the Buffalos created twice as many opportunities as their hosts and conceded from their opponent’s only two attempts on target.

Beerchot claimed a hugely respectable 9th place finish in their first season back in the top-tier last term, though the man that led them there – William Still – left in the summer to take up a role with Reims in France. The vastly experienced Peter Maes was chosen to replace Still, though the 57-year-old’s tenure got off to a limp start with a 1-0 defeat at home to Cercle Brugge last week.

Top Betting Odds and Stats for Gent vs Beerschot 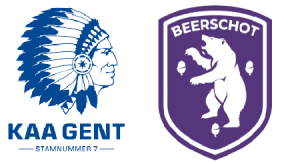 Sunday’s game will be played at the GHELAMCO-arena.

Gent and Beerschot shared the spoils when they last met in January when the teams finished level at 1-1.