One of the greatest derbies in Belgium returns this weekend – Gent take on Genk for the second time this season in the 18th round of the league.

Gent and Genk are near each other in the standings but the hosts are in much better form. Gent are the big favorites to win this match after they won the previous meeting with 0:3 earlier in the season.

This is one of the rare games in the Jupiler Pro League, in which we do not expect to see both teams score. Genk are in terrible form and have not won an official game in 9 games – since October. On the other side, Gent are incredible and have conceded just 1 goal in their last 5 official games in all tournaments. The previous match between the teams in the 12th round ended 0:3 for Gent. In this match, Genk had their chances but Gent's defense has simply been incredible. The team has conceded among the lowest numbers of goals at home since the start of the season – only 10 in 8 games and most of those games were before they entered this current form.

As mentioned above, Genk have not won a match since October. Since then, they had 4 losses and 4 draws but this match against Genk will be their most difficult task since. The hosts are one of the strongest teams at home in the league, having won 5 out of 8 matches. Gent will be motivated to continue their 4-game winning streak with a fifth win against an opponent that is definitely out of shape. Not to mention that a win here could put them right in the top 4 of the league.

As it is not obvious that Gent our the big favorite and our personal choice, we also expect them to net at least two goals in this game. Genk have one of the weakest defenses in the league – they have conceded 29 goals in 17 games, most of which occurred in away games. Gent is the team that has scored the most goals at home this season out of the entire league – 19 in 8 games. And – more importantly, they scored at least 2 goals in 7/8 games – the only one in which they failed was against Royale Union, who are the strongest side in the league.

Top Betting Odds and Stats for Gent vs Genk

FAQs regarding Gent vs Genk 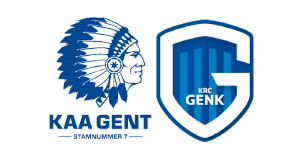 • Which players will miss the match for Gent?

Fortunately for the hosts, they haven't got a single missing player for this match, which means they will be as strong as they can be.

• Which players will miss the match for Genk?