This preview focuses on the first-ever meeting between Germany and North Macedonia.

Germany take on North Macedonia for the first time and the betting tips will focus heavily on this World Cup qualification match from group J.

Germany are in a very strong position coming into the game while Macedonia are only expected to hang on for as long as they can in this game. After back-to-back wins in the opening two rounds of the World Cup qualification campaign, Germany are aiming for a 100% record going into the European Championships. The -2 handicap is available at an excellent price and it is a better pick than backing Germany to win.

Germany have scored over 2.5 goals in just two out of the last five matches. However, they are up against an opposition that is expected to ship a lot of goals. North Macedonia have just conceded three goals in a single game against Romania, who went on to lose without scoring a goal against the Germans. Another home game – just like the Iceland encounter – could produce a high-scoring game.

Serge Gnabry has been preferred up-front over the likes of Timo Werner. Manager Joachim Loew might just retain the philosophy going into the last qualifier before the European championships. Gnabry repaid the faith of the manager by scoring the winner against Romania.

The former world champions Germany are aiming to successfully conclude the first few games of the World Cup qualification campaign before Joachim Loew steps down as the coach following the European Championships. So far, it has been just perfect for Germany, who have scored four goals and conceding none in the opening two rounds. Loew comes into the game without many first-team players unavailable like Toni Kroos and Niklas Süle. Germany are expected to make some changes to the starting line-up after failing to make any changes in the opening two rounds.

North Macedonia provided a massive lift to the confidence levels after beating Liechtenstein 5-0 in the second game of the World Cup qualification campaign. The betting tips for the game, though, is aware that Macedonia are behind Germany by more than 50 positions in the FIFA rankings. Furthermore, coach Igor Angelovski is missing some key players in the squad like Ivan Trickovski, Gjoko Zajkov, and Tihomir Kostadinov. Aleksandar Trajkovski is one of the high scorers in the squad after grabbing a hat-trick against Liechtenstein.

Best Betting Stats and Odds for Germany vs North Macedonia 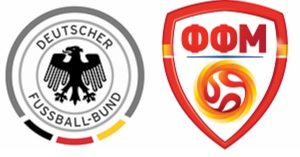 This match will take place at the MSV-Arena in Duisburg, Germany.

Germany are branded as the favourites to get success in this match at odds of 1/10.