Gimcheon Sangmu will host Daegu in a match from the 12th round in the Korean K League 1.

These two teams are on the same level at this point and this game could go in favor of either side.

Both teams had some goal-packed games since the start of the season but we expect a difficult and competitive match here that will not have a lot of goals. What's important is that Gimcheon have been performing great at home this season and conceded just 3 goals in their first four fixtures. On the other side, Daegu have been one of the weakest away teams since the start of the season and scored just 5 in 5 games.

Daegu have been in better form than their earlier from the start of the season but their away performances have not been great overall this season. After 5 rounds, they have not yet won a single fixture on the road and lost three of those games. On the other side, Gimcheon Sangmu have not yet lost a single match at home this season after winning 3 and reaching one draw.

Gimcheon Sangmu is the professional football team of the South Korea Armed Forces. This means that its entire squad is made up of soldiers that are professional footballers. Even so, the team has been performing above average, especially at their home ground. They have been surprisingly good offensively while their defense can benefit from some improvements. After 11 rounds, Gimcheon have a goal difference of 14:12.

Daegu have had a surprisingly bad start to the season after ending at 3rd place last season. They had to play a bunch of fixtures in the AFC Champions League, so this could be the reason of their struggles. We see some improvement in their performance but we think that it will take some time before we see them near the top again. They actually have a negative goal difference after 11 rounds – 14:16.

Top Betting Odds and Stats for Gimcheon Sangmu vs Daegu

FAQs regarding Gimcheon Sangmu vs Daegu 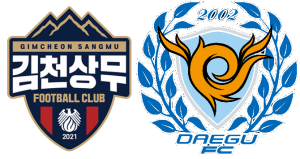 In which places are Gimcheon Sangmu and Daegu?

The teams are currently almost next to each other after 11 rounds. Gimcheon Sangmu are now 6th with 15 points while Daegu are 8th with 12 points.

This fixture has been scheduled for Gimcheon Sangmu's home ground – the Gimcheon Stadium.

This game has been scheduled for 7:30 UTC.