Tuesdays offering from the Indian Super League comes from Margao as 8th place Goa prepare to host third place ATK Mohun Bagan. Despite the difference in league positions between the teams only eight points currently seperate the two sides. A win here for both is vital if they are to keep their top four hopes alive.

When it comes to recent form, it’s ATK who have the form edge having won eleven points from the last fifteen possible, a run of form that sees ATK sit third in the current form table. ATK are just three points off top spot and have two games in hand on Hyderabad who sit in first, a win here would go a long way in helping bridge the gap as well as keep the distance between them and the chasing pack. For Goa this league season has been frustrating as they haven’t been able to put a period of consistent results together. The home side have taken just five points from the last possible fifteen available and have won just one of their last six, but it did come in their last match which was a stunning 5-0 win away at Chennaiyin. This could be closely fought game and the draw might be a really good way to play.

The Best Match Odds for Goa vs ATK Mohun Bagan 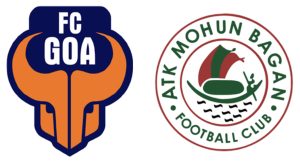 The teams have only ever met on three occasions with ATK winning twice and there being one draw.

What is the kick-off time for Goa vs ATK Mohun Bagan?