Wednesdays Indian Super League offering comes from Goa as they take on East Bengal. It’s a battle between two teams who need to boost their position in their table with Goa in 8th place and East Bengal propping everyone up at the bottom of the table. In a league that is tightly packed both teams could really do with a victory.

In a match between two teams who have been struggling for wins this is a tough match to call, however we will side with the home team to emerge victorious here. Remarkably you have to go back to February of last year to see when East Bengal last won a match. Thankfully for Goa supporters you don’t need to go that far back to see when Goa last won a match as they beat Chennaiyin just a few weeks ago. Goa are the better team and are in the better form, it’s hard to have confidence in any sort of team who have gone almost a year without a victory and we have to side with Goa to emerge victorious here.

When it comes to betting the over or under 2.5 goal market, the smart play looks to be on backing the under. These sides have met four times in their history and under 2.5 goals has occured in three of these contests. Despite not winning, East Bengal have been competitive and have only seen over 2.5 goals in one of their last five matches. Goa have only seen the 2.5 goal mark exceeded in two of their last five. It could be quite a cagey match here and we think the under is a smart way to bet.

The Best Match Odds for Goa vs East Bengal 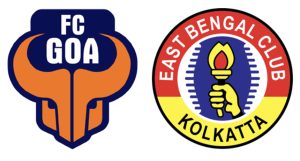 In the last four matches between the pair both sides have won once with there being two draws.

What is the kick-off time for Goa vs East Bengal