Standing with one another in the points table, Grimsby and Dag & Red face each other in the next National League engagement. The Daggers registered victory in the previous game while the Mariners dropped three points.

Grimsby Town are winless from the last two attempts and won only two of the previous five outings. However, Dag & Red have done better than their guests and recorded four victories in the last five league outings. The visitors will also be in the high potential to have the consecutive three away wins before this game. Moreover, the Daggers won all of the last three H2Hs against Grimsby Town. So Dag & Red are more likely to take the lead in this duel.

We didn’t see both teams giving a bunch of goals but looking at the average, there would be high chances to witness at least three goals. Grimsby and the Daggers shared nine goals in the last two H2Hs. Adding more, the visitors hit the target nine times in the previous five games while the hosts scored seven times in the same number of home games.

All three H2Hs meetings between these teams ended with BTTS outcomes and the same is expected for this game as well. The Mariners didn’t score in only one game of the last eight home attempts. while on the other side, Dag & Red come into this game after scoring consecutively in the last six games. The visitors have also scored in all of the recent overall H2Hs.

The Mariners terminated the unbeaten streak of four home games and lost in the previous attempts against Solihull Moors. Getting half the number of wins out of 34 games, Grimsby Town are currently eighth in the points table with 56 points. The manager Paul Hurst doesn’t have any fitness concerns to report before this game.

The Daggers had a home defeat recently but made the comeback to their winning way of National League outings in the last game victory against Eastleigh. The team also managed equal victories but lost one more game than their upcoming rivals, standing at the ninth position with 55 points. All the members of the squad are fit to play this game.

Top Betting Odds and Stats for Grimsby vs Dagenham & Redbridge

FAQs regarding Grimsby vs Dagenham & Redbridge Coverage and Accessibility 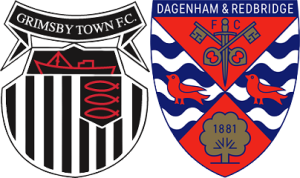 Who are the bookmakers' favourite to win? Grimsby Town.

Who won the last Head to Head fixture? Dagenham & Redbridge won with a 3-2 scoreline.