Guangzhou City will face Wuhan FC in another match from the 12th round in the Chinese Super League on Saturday.

Guangzhou City and Wuhan have been two of the weakest teams of the entire league this season. Here are our predictions for this fixture.

At this point in the season, Guangzhou City and Wuhan are both in need of points as the two teams are in bad positions. Neither of these teams has a great attack or a great defense. We have a lot of history between these two teams althought hey have not played against each other since 2019. Back in the day, four of the last five times they played, there were goals from both sides as well as over 2.5 goals. We think that the rivalry will begin again and with a thrilling goal-packed game.

Neither of these teams should really be considered a favorite as both have been struggling throughout the season to date. However, Guangzhou City have been much worse – in fact, the weakest team in the league overall. They have a single win in 11 rounds to date and the worst possible goal difference. Wuhan have 2 wins on the road out of 6 games to date, which is not good but not that bad for this matchup either.

When it comes to corners, there are two teams that sit at the bottom of the statistical data – Guangzhou and Wuhan. These are the two teams that have had the fewest overall corners in their games this season. Wuhan have had 7.3 per game and Guangzhou have had 7.1 per game. We expect this game to be goal-packed but there should be few corners as usual.

Guangzhou City were one of the better teams in the previous season and finished in the Championship Group at 7th place. Their goal difference was barely positive but they were still a good team. This season has been exactly the opposite for them and the team has won a single game in all matches to date. It is apparent that they will finish in the bottom half of the table but it is not too late for them to get saved from relegation yet.

Wuhan were one of the weakest teams in the previous season and finished near the bottom of the table at 14th place. This new campaign has been slightly better for them and we believe that they will save themselves from relegation with ease. Their defense is a huge problem and their attack is not effective enough but fortunately, there are several weaker teams in the league. 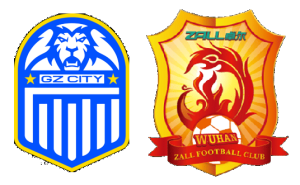 In which places are Guangzhou City and Wuhan?

This fixture has been scheduled for Guangzhou's home ground – the Yuexiushan Stadium.