The second group of matches in the 19th round of the Chinese Super League includes two teams with completely different goals at this point – Guangzhou and Beijing Guoan.

Beijing Guoan have the mathematical chances to reach the AFC Champions League but their performances since the restart have been disappointing. Now, they face Guangzhou which are yet another serious and difficult opponent. Which side will steal the three points on Sunday?

Guangzhou were a completely different team in the regular season – back then, they had mostly over 2.5 games and against any opponent. Now, since the restart, they have not yet had a single over 2.5 in four games and we do not expect to see it happen against Beijing Guoan. The two teams played once already and the match ended at 1:0. Beijing are the second lowest-scoring away team in the league with just 7 goals in 9 games. They managed to score in the last game against Guangzhou but we do not see it happening in this visit.

The odds are surprisingly high given that Guangzhou have definitely not been one of the better teams since the restart. Yes, they took the win in the previous head-to-head and definitely were the better team on the pitch but this upcoming fixture will be something different. Beijing Guoan are the weakest away team in the league with just 2 wins in 9 games. They had one draw and the rest of the 9 games were losses. Guangzhou have not yet lost a match at home this season with 6 wins and 3 draws. The high odds here surprise us and we believe that they are well worth it.

As mentioned above, Beijing Guoan are the weakest away team based on points won. We also mentioned that there is just one team that has scored less goals than them in away games this season. Seeing them score more than once here will be a complete shocker. The team has scored more than 1 goal in just 1/9 visits and that was against one of the weakest sides in the league.

Top Betting Odds and Stats for Guangzhou vs Beijing Guoan

FAQs regarding Guangzhou vs Beijing Guoan 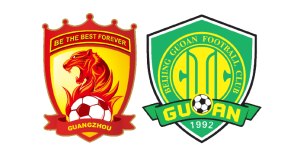 • In which places are Guangzhou and Beijing Guoan?

Both sides are not too far away from each other in terms of points – Guangzhou have 35 while Beijing have 28. Yet, there is a big difference in places because the Chinese Super League is extremely competitive – the hosts are 2nd while Beijing are 6th.

Beijing Guoan are one of two teams with a negative goal difference – 23:25. On the other side, Guangzhou are the highest-scoring team in the league – 42 goals scored next to 16 conceded.