This preview looks at the Chinese Super League game between Guangzhou FC and Henan Songshan Longmen at the Tianhe Stadium.

Guangzhou remained in touch with Shandong Taishan by getting a 5-2 victory over Cangzhou Mighty Lions in the home match. Wei Shihao scored a brace and Ricardo Goulart secured a hat-trick for Guangzhou to help achieve this big win. Henan Songshan Longmen claimed back-to-back league wins at home after a 1-0 success over Chongqing Liangjiang.

Guangzhou win and over 2.5 goals

The games over Henan Songshan Longmen have produced plenty of joy for Guangzhou in the past with four wins in the last six meetings. A similar proportion of games have also witnessed over 2.5 goals. Even though Henan Songshan Longmen have conceded fewer goals than Guangzhou so far this season, the offence of Fabio Cannavaro’s team will be in a great position to get more goals.

Even though Guangzhou have been on an amazing run, their defence has been exposed on frequent occasions. Despite having been the top team in the last six games, Guangzhou have conceded an average of 1.5 goals per match. The offence of Guangzhou needs little introduction with the team having registered the highest number of goals (27) so far this season.

Guangzhou to score highest in the first half

A significant factor behind Guangzhou’s excellent run over the last few weeks would be their offence, which has come up with a remarkable 20 goals in the last six matches. A higher percentage of these goals have come in the first half. Henan Songshan Longmen’s defence has been quite solid, but they have marginally conceded more goals in the first half.

Guangzhou are still three points behind Shandong Taishan and it is largely owing to the away loss against Shenzhen. Apart from this result, Guangzhou have not put a foot wrong in recent games and Cannavaro will be hoping to maintain this excellent run in the remaining three games of the regular season. Cannavaro has a fully fit squad available at his disposal.

Henan Songshan Longmen have been raising a decent number of points from home matches, but Javier Pereira is clearly aware that the team needs to start performing in away matches. After having achieved no away wins so far in 2021, Pereira takes a fully fit squad to the Tianhe Stadium. 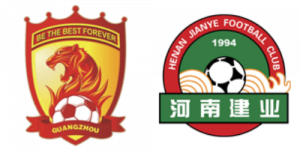 This league match will take place at the Tianhe Stadium.

Guangzhou are rated as the overwhelming favourite to get three points in this match.