After the successive four away games, Hajduk Split return to their home to face Vitoria Guimaraes in the Europa Conference League Qualifiers. Both teams enter this game on the back of an unbeaten sequence.

Hajduk Split had been through winless games but managed two consecutive wins in the last two outings. However, they lacked consistency in the recent home attempts and won only two of the previous five, together with two draws and one defeat. On the contrary, Vitoria Guimaraes are yet to lose in the last eight games, winning four of them. The conquerors are also unbeaten in the previous five away outings and registered two victories. So we see Vitoria with the greater potential to claim the advantage in this game.

The front line of Hajduk Split seemed effortless before the last two games but they recovered to score two goals in each of the last two outings. On the other hand, Vitoria Guimaraes have found the back of the net 13 times in the last five attempts, scoring at least three in three of them. Furthermore, the Masters from the Sea has leaked the goals with an average of two goals per game in the recent home attempts. Hence we expect this game to end in a high-scoring total.

Hajduk Split have been consistent in the scoring end at their home games and had a long streak of finding the back of the net before the last one. The Conquerors have also been quite the same by scoring in four of the last five attempts. Vitoria didn’t get a huge total in the recent away outing but they scored at least one in most of them. So we will be hoping for a BTTS pattern in this duel.

The Masters from the Sea had a perfect start to Prva HNL and secured the consecutive second win in the last game against Varazdin. Hajduk Split ended the previous campaign in second place to get into the semi-finals of the ECL Qualifiers. There is no fitness or suspension issue in the team ahead of this game.

The Conquerors concluded the second leg of the previous round in a 0-0 draw against Puskas Academy previously. But a 3-0 lead of the home leg got Vitoria Guimaraes to this round of ECL Qualifiers. Defensive midfielder Tomas Handel will not be able to play this game due to a muscle injury.

FAQs regarding Hajduk Split vs Vitoria Guimaraes Coverage and Accessibility 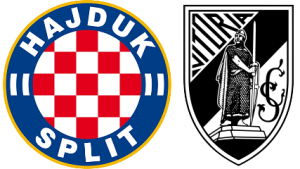 Where is the game being played? Stadion Poljud (Split).
Who is the referee for this match? Mohammed Al-Hakim (Sweden).
When is the match scheduled? The match will take place on 04 August 2022 at 21:00 GMT.