Halifax will face Notts County in another huge match from the 5th round of the National League on Saturday.

Halifax and Notts County have been among the top teams in the league but both did not have the perfect starts in the current season. Here are our predictions.

Notts County are a high-scoring team and can score three goals alone against any opponent. We do not expect to see it in this game because of Halifax's performances. The home team still does not have a win in the season but their defense definitely is not that bad. They know how not to concede a lot but their problem is the attack. All five of the previous games against Notts County had a lot of goals and from both teams but in this case, we expect a solid performance from Notts and few goals.

Notts County are the much better team right now but they have definitely had their problems in the new season too. They score a lot of goals but they also concede a lot. It is true that they had one of the hardest schedules since the start and they still have not lost a match in four rounds. The problem is that they have three draws in a row and if Halifax show some of their old form, they could get a draw too. In each case, we do not expect Halifax to win so we are betting in favor of Notts County.

We are betting against history here because these two teams have been among the best in the league over the past few years and the games between them are always explosive. All five most recent head-to-head games ended with goals from both teams but we do not expect to see it in this match. Halifax do not have a win in the new season yet and in fact, they have not yet scored a goal. Notts concede a lot but we think that they will not here.

Halifax were a top team in the previous season and finished in 4th place. They had the absolute best defense in the league and conceded just 35 goals in 44 rounds. The new campaign has been a complete disaster for the team and they have not yet won a game nor even scored a goal. They are one of three teams in the first five divisions in England without a goal after four rounds.

Notts County were just as good as Halifax last season and finished below them in 5th place. They had one of the strongest attacks in the league with 81 goals in 44 games and this has not changed in the new season. The difference is that their defense has been conceding a lot more and this needs to change if they want to win games and continue to fight for that promotion. 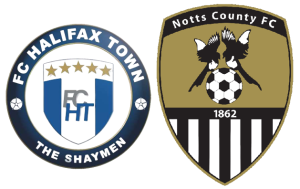 After four rounds, these two teams are unexpectedly far from each other in the table. Halifax are obviously at the bottom with a single point and a 0:4 goal difference while Notts County are 10th with 6 points and 8:5.