National League title contenders, Halifax Town takes on the challenge of Dover Athletic in Round 30's action. The visitors have been the worst side in league competition this season and it remains to be seen how they fare against the challenge of high flying Shaymen.

Dover's financial problems have seen them feature amateurs and it has not worked in their favour. Halifax Town should surely have enough in the tank to get over their abysmal rivals, as they did in the reverse fixture at the tail end of November 2021. The Shaymen earned a 1-3 away victory at that instance and should complete the double over them at the second time of asking.

While Dover has been struggling this season, their performances against Halifax had not been exceptional before. The Shaymen earned a 4-2 in the last iteration of this fixture and will be confident of forcing another high scoring affair at their expense this time around. Three of their last five fixtures finished in this manner and we expect the trend to continue at the expense of the Whites.

There is no denying Halifax's scoring prowess as they chase down Stockport County at the top of National League rankings. The same cannot be said about Dover, who has only scored twice in their last two outings. While their most recent two duels with the Shaymen saw them getting on the scoreboard, the confidence level of these teams had been very different. With Halifax conceding only three goals in their last five outings, the likelihood of it is increasingly low.

Pete Wild has raised expectations at the Shay this season. His charges are fighting for the league title and are 8 points adrift of league leaders with two matches in hand. They stumbled with defeats to Boreham Wood and Maidenhead but recovered with a well-deserved win over Dag & Red. They will want to build on that result as they host relegation-threatened Dover.

Since his appointment as Dover Athletic manager, Andy Hessenthaler has been working with both his hands tied at the back. The Whites do not have any move for manoeuvrability in the transfer market after going into administration and have been forced to work with amateur players as they could not pay their professional staff members.

Top Betting Odds and Stats for Halifax vs Dover

FAQs regarding Halifax vs Dover Coverage and Accessibility 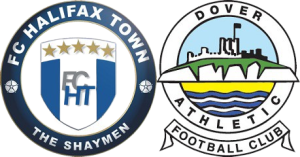 Where is the game being played? The Shay.

Who won the last Head to Head fixture? Halifax won with a 1-3 scoreline.