Hamrun Spartans will face Alashkert for the second time in a week for the Europa Conference League Qualifiers.

Alashkert won the first match as expected but it was a minimal win that may not be enough to settle this rivalry. Here are our predictions for this match.

Neither Hamrun nor Alashkert are teams that score lots of goals in their games and we expect to see another low-scoring match just like the first one. The match last week ended in a 1:0 win for Alashkert. In this second match, we do not expect more than 1:0 for either side or possibly a 0:0 draw. The teams are absolutely equal in strength and we do not expect to see too many chances in this fixture.

As explained above, these two teams are absolutely equal in strength and have equal chances in the 2nd leg here. We, however, think that Alashkert are the better team out of the two and they generally play in a bigger league. Moreover, Alashkert are much more experienced when it comes to playing internationally. The team has been in great form and showed a better performance in the first match. We do not think that they will lose this match.

Hamrun did not have the greatest of seasons in Malta in the previous campaign although they won the championship one year prior. The team had serious issues in both attack and defense. For comparison, the team is valued at 4 million euros right now which is rather impressive for such a small league. They did not create a single chance in the first match against Alashkert and have to step up their game if they want to continue forward.

Alashkert's current situation is similar to that of Hamrun – the team did not have the best season and that was after they won the championship in 2021. Their problems are also identical – they failed to score goals in too many games and their defense was not good enough for them to be a contender. The team is also not valued much higher than Hamrun – just 4.65 million euros.

Top Betting Odds and Stats for Hamrun Spartans vs Alashkert

FAQs regarding Hamrun Spartans vs Alashkert 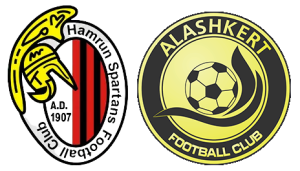 In which places did these two teams end the previous seasons in their leagues?

Hamrun and Alashkert play in very different leagues but both ended in 3rd place and quite far from the champions.

This fixture has been scheduled for the Centenary Stadium in Ta' Qali.