Hamrun will face Velez Mostar in the second leg of their Europa Conference League qualifications on Thursday.

Hamrun won by surprise in the first match and put Velez Mostar in a very difficult position. Here are our predictions for this match.

This is a difficult game to predict because there should be an obvious difference in level between these two teams but Velez did not show it in the first match. At the same time, Hamrun scored 4 goals in their previous ECL fixture at home a couple of weeks ago. This game could go in any direction and we expect more action that we saw seven days ago.

We are giving Hamrun the benefit of the doubt and we will go with a bet for them. Velez Mostar should be the better team on paper but that did not show in the first match. At the same time, Hamrun are very strong at home and they beat Alashkert with 4:1. We expect another strong performance from them and even if they do not win, we doubt that they will lose either. The draw no bet will return our money if the game ends as a tie.

We do not expect a lot of action when it comes to corners. Shockingly, Velez Mostar had just 5 corners in the first match while Hamrun did even take one for 90+ minutes. Now, the positions will be the opposite and we do not expect that many from Velez either. There is a lot of value in this market and the odds are high.

Hamrun Spartans are one of the better teams in Malta although that is not a massive success. Still, the team performs well and is in the top 4 of the best teams. Their stats are not spectacular – this is usually a low-scoring team. In 22 rounds in the previous campaign, they had a goal difference of 28:22.

Velez Mostar returned to the elite in Bosnia a couple of years ago and they have been performing well since then. The team is one of the best in the league and has one of the best attacks overall. The main problem for Velez Mostar is the defense that concedes too many goals. They will have a much harder task against Hamrun than expected, no doubt.

Top Betting Odds and Stats for Hamrun Spartans vs Velez

FAQs regarding Hamrun Spartans vs Velez 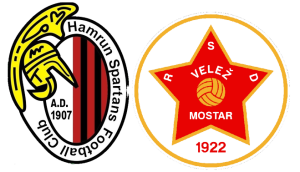 This fixture has been scheduled for Hamrun's home ground – the Centenary Stadium.