Saturday’s final match in Israel’s Ligat Ha’Al is a fascinating contest between Hapoel Be'er Sheva and Maccabi Netanya. It’s a contest that sees Be'er Sheva who are second in the league take on Netanya who are 8th. Three points would do wonders for both sides as they look to maintain their title and top six push.

When it comes to recent form both of these sides are evenly matched. Be'er Sheva sit in sixth in the form table having taken nine points from a possible fifteen, Netanya are just behind them in eight place having taken seven points from a potential fifteen. Be'er Sheva have won three of their last five but do enter this match having lost in the quarterfinals of the Israeli State Cup in their last match. Netanya produced a battling display to earn a point against current runaway league  leaders Maccabi Haifa. Netanya won’t be an easy nut to crack and we think a draw here might be the most viable result between two evenly matched sides. At odds of 29/10 it could be the value play.

When it comes to betting the over or under 2.5 goal market, the smart play looks to be on backing the under. In the last five games that these teams have played Be'er Sheva have scored six goals whilst Netanya have scored five. Both have only seen over 2.5 goals in two of their last five matches and despite over 2.5 goals taking place in three of the last five head to head contests, we think this could be a tight game and fancy the under 2.5 to come through. 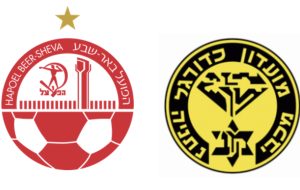 This game will be played at the home of Be’er Sheva at the Toto Turner Stadium.

In the last five matches between the pair there have been two draws whilst Be’er Sheva have won the other three contests.

What is the kick-off time for Hapoel Be'er Sheva vs Maccabi Netanya?