This is a preview of the League Two meeting between Harrogate Town and Barrow at the EnviroVent Stadium this weekend. This is only the second league match of the season for Harrogate.

Harrogate were involved in a thrilling 3-2 win over Rochdale in the opening game of the campaign, but their match against Crawley was postponed. Barrow were forced to a goalless draw against Exeter at home.

Harrogate to win the match

Harrogate Town are looking to make it back-to-back league wins at the start of the campaign. This would overcome the disappointment of the postponed game against Crawley. After three consecutive matches without a defeat, Barrow will have a difficult test when they travel away from home. Apart from a handful of wins, Barrow have not performed well on the road. Meanwhile, Harrogate will be once again bracing themselves for securing maximum points at home to survive in the division.

The goals from Harrogate are likely to be more pronounced in the home matches. The team has opened the campaign with a three-goal return. A major positive was Luke Armstrong scoring just five minutes into the campaign. Even if the visitors do not turn out to be major contributors, this game should produce more goals.

Luke Armstrong was one of the key players for Harrogate last season as he came up with 15 league goals. He did not waste any time in getting back up to speed for this season after scoring in the 5th minute of the opening match.

A victorious start to the new campaign would have been just the perfect thought for manager Dave Challinor. The home matches will be quite crucial for the club going forward in the campaign. In such an instance, the narrow opening day victory comes as a major relief for manager, who does not have any injury problems ahead of the game.

Barrow have gone through some decent performances at home and it is time that the club translated these performances into away matches as well. The run of three consecutive games without a defeat does place Barrow in a good spot. Stephen Ward is the only injury problem from the team coming into the game. 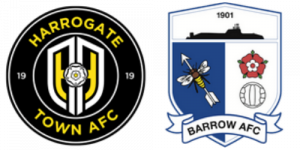 Where is the match scheduled? EnviroVent Stadium

Which team is regarded as favourite to win? Harrogate