Harrogate and Bradford go head-to-head for three points in League Two on Saturday. There are just three points between the teams ahead of this weekend’s clash at the EnviroVent Stadium. Read our free predictions and find the latest odds for the fixture below in our detailed match preview.

Bradford have lost just two of their last nine away assignments ahead of their trip to play Harrogate. Read our top three predictions for this weekend’s fixture below.

Bradford are priming themselves to launch a playoff push in the second half of the campaign in League Two and having avoided defeat in nine of their 14 away fixtures this term, the Bantams could pick up more points at Harrogate. Struggling Town have won only one of their last six matches in all competitions and that string of unconvincing performances means they are worth opposing in the double chance market on Saturday.

Both Harrogate and Bradford have been posting modest numbers in the final third of late and the teams’ shared lack of oomph in attack could translate into a contest of few chances at the EnviroVent Stadium. Town have failed to notch in five of their last six games, while Bradford have hit the net just six times in their last half a dozen tussles. With little in the way of cutting edge on show, we recommend backing under 2.5 goals to be scored this weekend.

After a strong start to the campaign, Harrogate’s performances have started to wilt and their hopes of pushing for a playoff spot are evaporating fast. Town did well to hold highflying Mansfield to a 0-0 draw on Tuesday evening, though Nicky Weaver’s charges have now won just twice in ten League Two matches and they are now closer to the foot of the table than they are to the summit.

Bradford were held to a disappointing 1-1 draw by Leyton Orient at The Utilita Energy Stadium in midweek, though the Bantams are still just six points shy of the all-important playoff positions in League Two. Manager and promotion specialist Derek Adams knows his team cannot afford many more slipups however, and the Scot was busy during the January transfer window in an attempt to ensure that form is more consistent.

Top Betting Odds and Stats for Harrogate vs Bradford 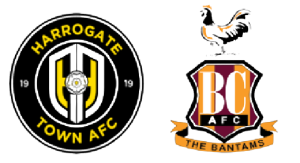 Harrogate have been installed as favourites to claim three points this weekend.

Saturday’s fixture will be played at The Utilita Energy Stadium in Bradford.