Two interesting teams with identical seasons to date will face each other in an important fixture from the 35th round – Harrogate vs Hartlepool.

Hartlepool finally lost after a long series of positive results and will now look towards a better result against a team in about an average form – Harrogate.

Matches between Harrogate and Hartlepool have always been thrilling and goal-packed, so it is about the same if you pick this market or the over/under market. We expect to see goals from both sides and over 2.5 without serious issues.

This is a difficult bet because both teams are in somewhat good form although they are just typical middle teams that can never be trusted with a long series of good results. We base out bet on several small factors – Hartlepool might have won two recent outings but they remain one of the weakest away teams in the league and that is a fact – they have won just 12 points in 17 outings at this point. Harrogate have not been perfect at home but there is something positive about their recent games and we believe that they will win against Hartlepool once more at home.

This matchup is perfect for the corners market because these two teams have not been taking a great deal of corners in recent weeks. We feel quite safe with our selection here and we would even go for the under 10 with a smaller stake. Harrogate have taken only 3.20 corners per game on average in their last five games, as well as 4.40 in the last five home games alone. On the other side, Hartlepool have been taking an average of 4.20 corners in their last five games and 4.40 in the last five outings alone.

Top Betting Odds and Stats for Harrogate vs Hartlepool

FAQs regarding Harrogate vs Hartlepool 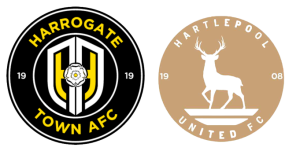 • In which places are Harrogate and Hartlepool?

Harrogate and Hartlepool are exactly next to each other in the middle of the table. The hosts have 43 points at 14th place while Hartlepool have 44 in 13th.